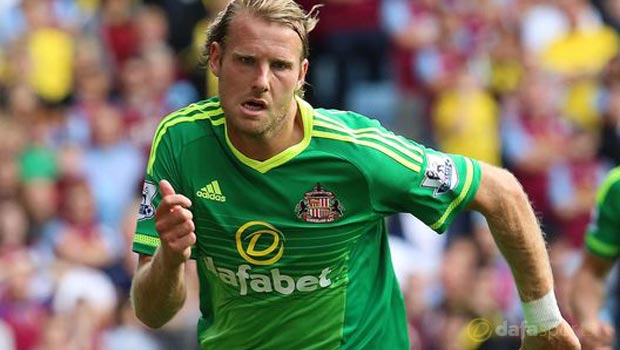 Sweden international Ola Toivonen was delighted with his role after helping Sunderland earn a share of the spoils against Aston Villa on his debut.

Toivonen joined on a season-long loan from French side Rennes, having previously worked with boss Dick Advocaat during their time at PSV Eindhoven.

The Swede immediately linked up with another former team-mate from the Eredivisie outfit, Jeremain Lens, to bring Sunderland level at 2-2 having been introduced as a half-time substitute.

He was understandably delighted to get off to a quick start at his new club.

“I won the ball in the middle and Jeremain was screaming that he had space, so I put it there and he managed to score.

“It is always nice to get some minutes especially now I’m at a new club in a new league, so it was a fantastic experience and I’m happy,” he told the Sunderland website.

Toivonen felt a draw at Villa Park represented a positive result for the Black Cats, although he admitted they had been toiling somewhat as the hosts took control after Yann M’Vila curled a superb 20-yard free-kick into the top corner early on.

“When you come to away games, especially Villa, I think you should be satisfied with a point; it was a tough game but we started quite good and got a goal, but we dropped our game a little bit and they took complete control to make it 2-1,” he said.

“We started the second half quite good and managed to get a goal, but then we struggled a little bit again and the players got a bit tired so 2-2 was a good result for us.

“It was fun and now we continue.”

Toivonen will hope to build on his debit performance when Sunderland entertain Tottenham after the international break. Advocaat’s team are 3.80 to win that Stadium of Light clash with Spurs at 1.95 and the draw 3.40.