Posted by Robert Morris on September 8, 2015 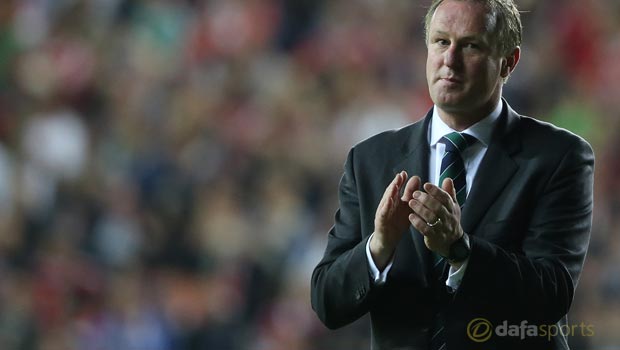 Northern Ireland boss Michael O’Neill claims his side are now in “a great position” to qualify for Euro 2016 following their last-gasp 1-1 draw against Hungary at Windsor Park on Monday night.

The Northern Irish required a win on home soil to seal a place in next summer’s finals in France, but an error from goalkeeper Michael McGovern gifted the opposition the lead on 74 minutes.

Chris Baird was then harshly red-carded after picking up two quick-fire yellow cards, before Norwich City’s fringe striker Kyle Lafferty pounced to score in the third minute of injury time to salvage a point.

It leaves Northern Ireland top of Group F, a point ahead of Romania and four clear of third-placed Hungary, and requiring two points from their remaining qualifiers at home to bottom side Greece and in Finland respectively to seal a place in their first major championship since the 1986 World Cup in Mexico.

“We’re in a great position,” said O’Neill. “If you offered us a four-point gap over third place with two games to go, of course we’d have taken that.”

Hungary host the Faroe Islands and then travel to Greece in their final two matches and O’Neill said that “the onus” is on them to try and pick up six points to prevent them from progressing.

Baird will miss the Greece game following his red card with O’Neill unhappy that the Derby County full-back saw two yellow cards in the same phase of play.

“I’ve never seen a player booked twice in one incident and I don’t agree with it,” he added.

“I can’t pretend I know the rules well enough to say if it’s legitimate or not but I think it’s a very, very harsh decision.”