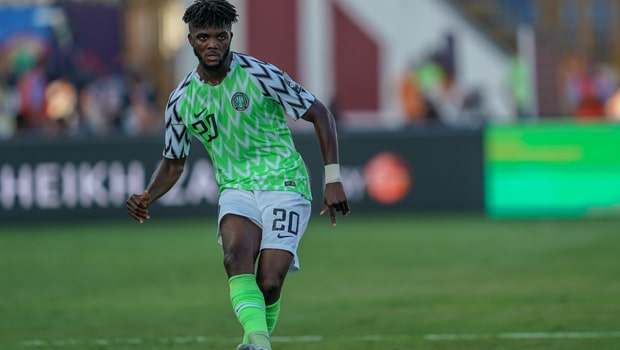 The Super Eagles of Nigeria has secured her second victory in the 2022 FIFA World Cup Qualifiers after beating Cape Verde 2-1 on Tuesday evening in Praia.

Nigeria had defeated Liberia 2-0 in Lagos last Friday but Cape Verde were held to a 1-1 draw by Central African Republic last Wednesday.

Nigeria was without Kelechi Iheanacho who scored a brace in Lagos alongside other UK-based players due to Covid19 travel restrictions as the UK government considers Cape Verde a red zone country.

The game started with Cape Verde going in front through Dylan Xamas in the 20th minutes.

Nigeria now has six points from two games and at the top of C till the next international break in October.

Meanwhile, forward Ahmed Musa made his 100th appearance for the country when he started the game.

However, he was substituted for Lorient striker Terem Moffi. Olympiacos forward Henry Onyekuru also featured after coming in for France based Moses Simon.

In the absence of Ekong and Leon Balogun, Chidozie Awaziem and Kenneth Omeuro were paired in defence.

There were also rare starts for Innocent Bonke, Kingsley Micheal and Chidera Ejuke.

Nigeria will face Central African Republic in a double header in the next International break in October.

Liberia are in second with 3 points after beating Liberia yesterday and Cape Verde in third with one point while Liberia remains bottom of the table.

In other results on Tuesday, Tunisia defeated Zambia 2-0 while Senegal beat Congo 3-1.

Tanzania played an enterprising 3-2 victory over Madagascar while Ethiopia and Malawi beat Zimbabwe and Mozambique by a single goal each.