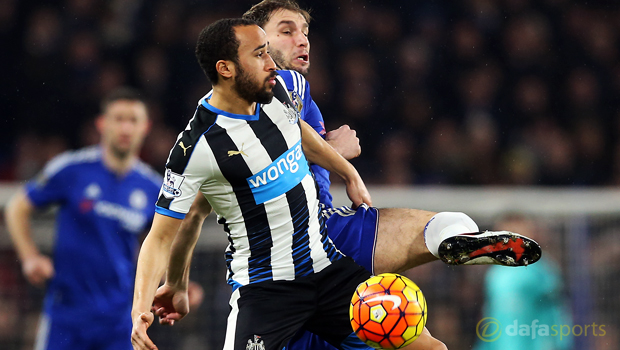 Euro 2016 hopeful Andros Townsend is hoping he can build on his first goal for Newcastle United and help the club achieve their target of Premier League safety.

The 24-year-old made the switch to St James’ Park in January after leaving Tottenham for £12million – the same amount they paid for Jonjo Shelvey, who joined from Swansea City last month.

He has already made three appearances for the Magpies and the winger managed to open his account for the north-east outfit in the recent 5-1 defeat to Chelsea at Stamford Bridge.

It was nothing more than a consolation as the visitors were 5-0 down at the time but the quality of the strike proved the Leytonstone-born star still has a lot to give.

The former Queens Park Rangers loanee will be hoping he can kick on for the rest of the campaign and force his way back into England’s plans for Euro 2016.

Townsend was a regular fixture for the Three Lions a couple years ago but a drop in form, along with some niggling injuries, has seen him fall away from the international stage.

His primary objective is to help Newcastle survive relegation, with the club still in the bottom three, and the winger is targeting a successful run with his new team.

“I’m just delighted to be back playing Premier League football,” he said. “I’ve not really played consistently for a long, long time.

“On a personal level it’s positive and I can’t wait now to get better, score more goals and help Newcastle stay in the Premier League, which is the main aim.”

Newcastle, who are priced at 2.20 to be relegated this season, return to Premier League action on March 2 when they face a difficult away trip to Stoke.

A home clash with fellow strugglers Bournemouth, who are a 9.00 chance to go down, follows three days later and the result of that match could be vital for both teams.