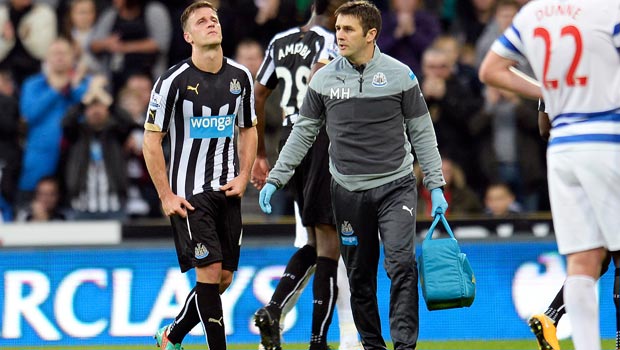 Newcastle United defender Ryan Taylor has admitted that the injury he suffered on Saturday against Queens Park Rangers wasn’t as bad as first feared.

The former Wigan right-back was forced off in the 34th minute against the R’s with what looked like another knee injury.

Taylor was starting his first league game in 993 days but he left the field in tears having already suffering two cruciate ligament injuries in his career.

Taylor’s American surgeon, Richard Steadman had travelled to the game to watch Taylor and he accompanied him to the hospital.

The 30-year-old missed around 26 months of action due to the problems and Toon boss Alan Pardew admitted after the match that the club were worried about the result of a scan.

He said: “We are sweating with Ryan. Fortunately, his surgeon was here in the stands today, he had come to watch from America, so he’s gone with him to hospital with our doctor, and we are just fingers-crossed on that scan.”

However, Taylor has now reassured fans that the injury isn’t serious and he left the field of play as a precaution.

He tweeted: “Thank you all for your positive messages. I appreciate them all, just to let you know I have no major problem.

“I had to come off today just to be on the safe side. I was just gutted to come off that’s why I got so emotional as I’ve worked so hard to get back. Thanks again.”

Taylor will be hoping he can regain his fitness in time for next Saturday’s clash away at West Ham United. The Magpies are 3.49 to win, with the draw 3.27, while the Hammers are available at 1.97 with Dafabet.