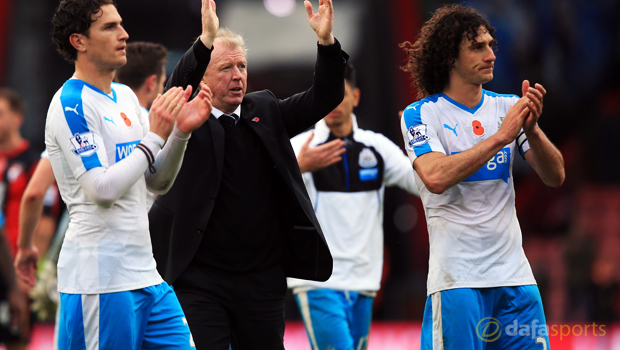 Steve McClaren says the tide is finally starting to change for Newcastle United after witnessing big improvements in the performances over the last month.

The former England head coach took over at St James’ Park in the summer but it has been a baptism of fire since the opening day of the Premier League season.

A lack of creativity, along with a suspect defence, has seen the Magpies battling against relegation for much of the campaign and they are still in a dog fight around the bottom of the table.

Newcastle have lost six of their 12 matches so far, with a 3-0 defeat to Sunderland and a 6-1 thrashing at the hands of the former Premier League champions Manchester City adding to the misery.

However, results have started to improve for the North East outfit recently and the 1-0 win over Bournemouth last time out helped lift the club out of the bottom three.

The success followed on from the 0-0 draw against Stoke City where Potters goalkeeper Jack Butland almost single-handily earned his side a point.

McClaren appears to be getting a grip on the team now, though, and the manager is delighted with the progression made by the players after a tricky start.

“We feel like we’re turning a big ship really in terms of trying to turn things around and it’s slow,” he said. “But you can see it turning. I see it every day.

“We feel like we’re turning a big ship really in terms of trying to turn things around and it’s slow. It’s still going to take a while to turn it around but they’re a good bunch of players who’ve got talent and work hard.”

Newcastle play host to high-flying Leicester on Saturday and the home side are slight outsiders at 2.80, a draw is a 3.40 while the Foxes are 2.50 favourites to continue their fantastic run of form.