Posted by Akinnifesi Olumide on September 29, 2022 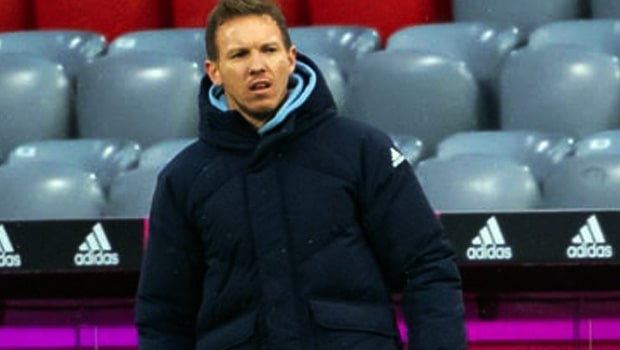 According to reports, there are serious doubts about the availability of Bayern Munich winger Kingsley Coman.

Following the absence of club football in the past week due to the UEFA Nations League, players are being assessed as they make a return to their respective clubs. So it is for Bayern Munich this weekend as they look to revive their poor form when they face Bayer Leverkusen on Friday night.

The 27- year old French-born has been injured since early September due to a torn hamstring. However, there have been positive signs of him engaging in individual training aside from the rest of the squad.

Ahead of the build-up to the game against Leverkusen on Friday, Bayern manager Julian Naggelsman has given his team update as he revealed Coman will not return to action due to his fitness issues.

However, he expects the likes of Sadio Mane, Alphonso Davies, and Noussair Mazraoui to return to base after missing training on Wednesday. However, there is just a training session to spare before matchday.

“Several of the boys have returned and are ready to go except for Kingsley. I’ve spoken with him and how he feels. I think he will be ready soon surely but not for the Leverkusen game”. He said.Bayern needs to get back firing after some disappointing run in their last three league games with points dropped against Gladbach, Union Berlin, Stuttgart, and a shock loss against Augsburg.

Although, on the European scene, they’ve been brilliant with wins over Inter Milan and Barcelona.
There have also been early rumors of Nagglesmann being sacked, but Sporting Director Hasan Salihamidzic has debunked such rumors insisting and showing his full support for the gaffer and also Senegalese international Mane.
Bayern is currently five points behind league leaders Union Berlin who has been impressive so far this Bundesliga campaign.