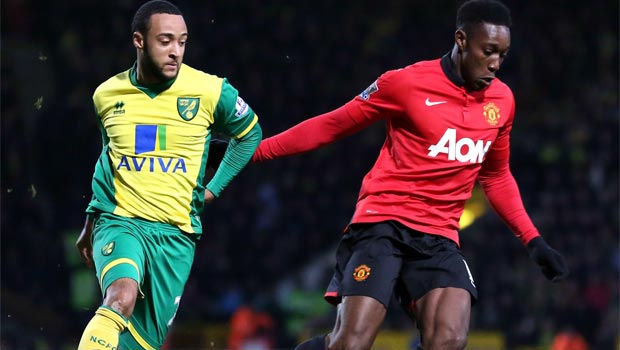 David Moyes says Danny Welbeck’s second-half performance changed the game at Norwich and the Manchester United manager has challenged the striker to break the 20-goal barrier this season.

Welbeck came off the bench at Carrow Road to net his fourth goal in five appearances as United recorded a fourth straight Premier League win to move within striking distance of the top four once again.

Moyes was without leading duo Wayne Rooney, who missed the trip to Norfolk as he rested a groin problem, and Robin van Persie, out since mid-December, but Welbeck’s finish delighted the United manager and left him asking for more.

“I have got to say it was all about Danny’s performance for me,” insisted Moyes. “I didn’t like the way we finished the first half, we gave away seven or eight corner kicks and we hadn’t got enough grip of the ball.”

Moyes sees no reason why Welbeck – who has hit seven goals in all competitions for United and three for England this season – cannot target a 20-goal season for the first time in his career.

“We have said to him we are trying to keep his finishing up. I think he can keep his efforts up, his levels up even better,” said Moyes.

“I think Danny has responded, he is saying ‘hey this is quite good I am beginning to score some goals and getting recognised for that as well’.

“He got one goal last year and now he is on seven for this season. It could be better, but you have got to say it is going in the right direction.

“With the second half of the season to go, he should be certainly looking to score 20 goals.

Moyes, who saw Tottenham’s 3-0 home win over Stoke City on Sunday, expects Rooney to return on Wednesday for the visit of Spurs.

“Ideally, we’d like to have a bit longer than three or four days between each game, but we’re not getting much time at this time of the season,” he added.

Van Persie has started some light training and Moyes intimated that the Dutchman might not be too far away from a return either.

“We haven’t often had them [Rooney and van Persie] as a strike partnership, so I look forward to getting them back together.”