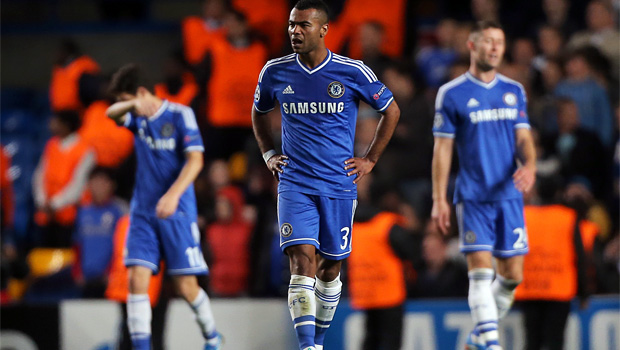 Jose Mourinho is confident Chelsea will qualify for the knockout stages of Champions League despite Wednesday’s shock 2-1 defeat against Basel.

The Portuguese tactician watched as his side threw away a 1-0 lead handed to them by Oscar as Mohamed Salah equalised for Basel with 19 minutes remaining and Marco Streller then headed in a late winner.

The result ended a run of 29 Champions League group games without defeat for Chelsea on home soil and Mourinho quickly absolved his players from blame afterwards and took responsibility.

The former Inter Milan and Real Madrid coach also played down fears about his striker options as Samuel Eto’o, Demba Ba and Fernando Torres – who was not even on the bench for the game – have only managed to score one of the side’s seven goals so far this term, as he claimed he is ‘happy with the three strikers for the rest of the season’.

Looking ahead, Mourinho says there are plenty of points left to play for to ensure there is no repeat of last season when Chelsea became the first Champions League holders to be eliminated at the group stage.

However, he feels a win in the return game in Basel on November 26 will be needed to ‘compensate’ for the defeat unless they can pick up the extra points at German side Schalke and Romanian champions Steaua Bucharest.

Mourinho said: “Normally you have to win the matches at home and get a few points away. Now we must win six points at home, Schalke and Steaua, but we have also to win points away.

“Probably we have to go to win at Basel to compensate for the defeat.

“But the objective of finishing in the top two in the group phase and to go to the next stage of the Champions League is an objective that is not lost – far from it.