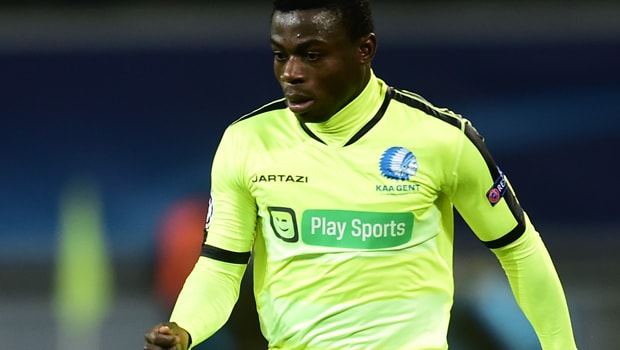 Nigeria international Moses Simon says he is still a Gent player “for now” after revealing there is nothing concrete regarding an offer from Liverpool.

Simon joined Belgian outfit Gent in 2015 from Trencin and he has been a regular first-team fixture ever since, making 108 league appearances and scoring 21 goals.

The 22-year-old winger was expected to be part of Nigeria’s 2018 World Cup squad but, unfortunately, a thigh injury ended his hopes of playing for his country in Russia.

Interest in the Jos-born star is said to be extremely high across Europe and there have been several claims suggesting Premier League side Liverpool are weighing up an offer.

The Reds have already been busy in the transfer market, with manager Jurgen Klopp bringing in the midfield duo of Fabinho and Naby Keita from Monaco and RB Leipzig respectively.

It is thought an offer around £10million will be enough to land Simon’s signature but, at the moment, the winger has revealed there has been no firm offer from the Merseysiders just yet.

He told AOI Football: “Well, for now, I’m still a player of KAA Gent; obviously, there was interest from Liverpool but nothing is concrete for now.

I’m currently in Holland with the rest of the squad and we are getting ready for the new season.

“We have a game against PAOK in two days; hopefully, I might play in that one.”

Liverpool are 6.00 to win the Premier League next season whilst Manchester City, who completed a club-record deal for Riyad Mahrez recently, are the firm 1.60 favourites to retain their title.