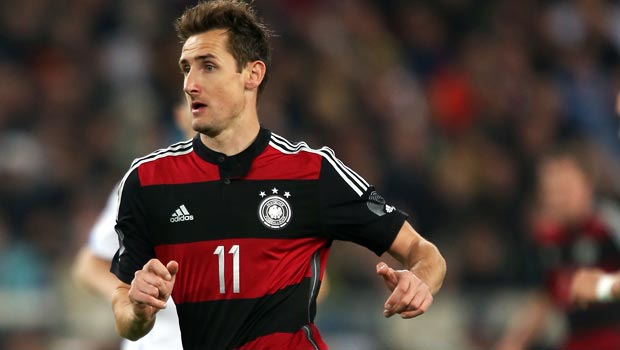 Miroslav Klose says his main aim this summer is to help Germany progress at the World Cup, although he admits he has one eye on becoming the tournament’s all-time leading scorer.

The Lazio hitman is one of just two recognised strikers who look set to be taken to Brazil by coach Joachim Low, with either Klose or Kevin Volland set to lead the line for the Germans.

Klose’s participation in the World Cup had looked in doubt after he picked up an injury which restricted him to just three outings for his Italian side between the end of March and May.

As such the 35-year-old has spent much of Germany’s training camp in Italy this week working on his fitness in the hope he will be ready to face Portugal in their opening game on June 16.

Klose is confident of being fit for that game in Salvador and is turning his attention towards adding to the 14 goals he has scored in the last three World Cup finals.

One more strike would see the former Bayern Munich man equal Brazil striker Ronaldo’s tally of 15, but Klose is eager to surpass that and make history this summer.

“I assume I will be 100 per cent ready for the tournament,” said Klose, who is 39.00 to win the World Cup golden boot for a second time.

“For me, the main thing is to be fit and the most important thing is the team. I am convinced that when the team plays well, then the striker will also get his chances. But anyone who knows me is aware that the goal record is a target of mine.”

While Klose was able to deliver an upbeat assessment on his fitness, there was bad news regarding midfielder Lars Bender who has been ruled out of the tournament with a thigh injury.

Klose admits it is a blow to lose the 25-year-old who looked set to be Low’s first choice to operate as the team’s defensive midfielder.

“We all know what a good footballer Lars is and he played a good season,” Klose said. “You need good players like that and I am really sorry for him that he is now injured.”

Despite Bender’s absence and a few other injury doubts, Germany are priced at 6.00 to win the World Cup, with defending champions Spain 7.00.