Middlesbrough manager Aitor Karanka happy to be back 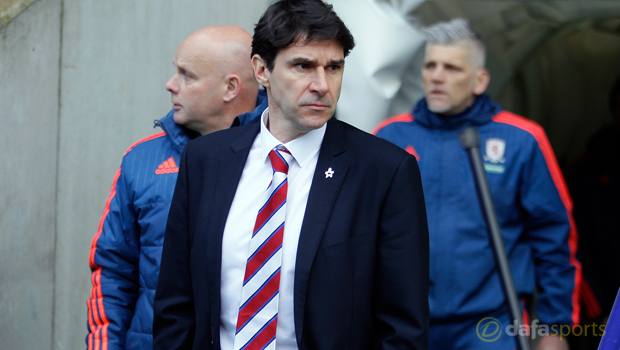 Middlesbrough manager Aitor Karanka insists he is happy to be back on the training field as he starts to put his plans together ahead of a campaign in the Premier League.

The Teesside outfit earned promotion to the top-flight via the automatic places last term as they finished second to Burnley in the Championship.

Karanka has welcomed back his squad this week as they begin pre-season training and look to hit the ground running when the Premier League season kicks off on August 13.

Boro, who are priced at 2.25 to be relegated, have had just under two months off to celebrate their achievement but now the hard work starts as they bid to retain their top-flight status and build a prosperous future.

The Spaniard is hoping to stick with a similar philosophy which saw them earn promotion and insists he is delighted to have been on such an incredible journey with the current squad.

Karanka said: “After that [Brighton] game everything has changed for us. “When I was arriving yesterday, I was thinking it seems like a long time since that day.

But when we were on the pitch today, I thought that we had never left. “All of [the players] know how difficult it has been to be in this position.

“Six players that were in the line-up against Brighton were fighting to stay in the Championship with me when I arrived here.”

The former Real Madrid assistant has already added some new faces to his squad but admitted he will give his Championship players the chance to prove they are up to the task ahead of their opening match against Stoke.

He added: “I know them, they know me, so for that reason we just keep going. “Now we have two or three weeks to sign new players, but we are in the Premier League thanks to the players that were here so it’s a good few weeks for them to convince me.

“Working together, and going the same way together is the only way.

Now, we have to the build the team in the same way to try and bring good players, and keep growing out in the same style.”