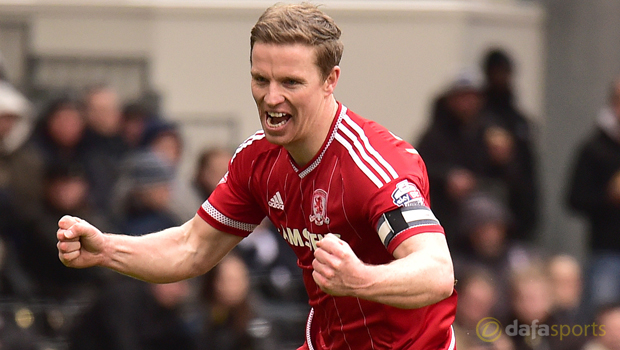 Middlesbrough manager Aitor Karanka insists that captain Grant Leadbitter is still playing a key role within the squad despite being ruled out with a long-term injury.

The midfielder is yet to feature since the club won promotion to the Premier League after undergoing surgery on a hernia problem at the end of last season.

Leadbitter was hopeful of being available for selection by the start of the campaign, but his recovery has suffered a number of setbacks, which have left him feeling frustrated.

Karanka admitted that his captain is not expected to return in the near future but feels he should be back in the mix fighting for game-time before Christmas.

The 30-year-old has been a key figure for Middlesbrough, who are priced at 5.00 to be relegated, since joining from Ipswich four years ago as they started to build a squad capable of winning promotion.

The Spanish manager insists he can sympathise with Leadbitter, who missed the derby with Sunderland before the international break, but has praised his attitude as he continues to try and motivate his team-mates.

Karanka said: “He can do, and he deserves to do whatever he wants because he is the captain and the decision he takes I am sure will be in the best interests in the team.

“Imagine how tough it was for him at Sunderland. He wanted to be with the team, he came with us on the coach, he was in the hotel, he came with us into the changing room as another player because he is the captain.

“He is the character of this team and when he is not on the pitch we can feel, and the players can feel, him supporting us.”