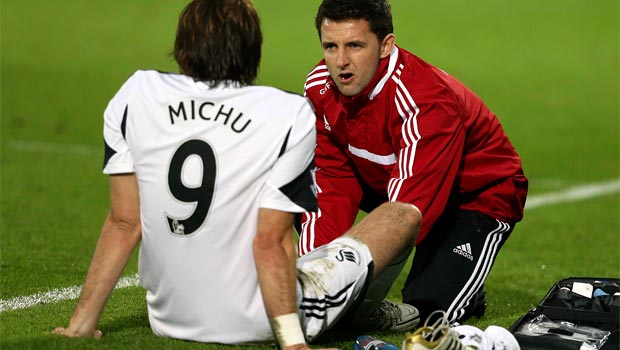 Swansea have been hit by news striker Michu could miss festive fixture programme after boss Michael Laudrup revealed he might face “several weeks” on the sidelines because of his persistent ankle problems.

The influential Spanish hitman, who was the club’s Player of the Year last term after firing 18 Premier League goals following his move from Rayo Vallecano in summer 2012, has not been as prolific so far this term with just two league goals in 12 outings to date.

However, after Michu missed Sunday’s 2-1 home defeat against Everton, Laudrup revealed that a potential lengthy absence is on the cards and it will prove to be a headache given that midfielder Nathan Dyer is already ruled out for a spell after he suffered ankle ligament damage in their 1-1 draw at Norwich on December 15.

Ahead of a scan on Michu’s ankle this week, Laudrup said: “We are not happy he could be out for several weeks, but the most disappointed person is Michu.”

Depending on the scan results, Michu could be in contention to face Chelsea on Boxing Day or he might require surgery which would almost certainly force Laudrup into the transfer market in the January window.

“If it is bad news, added to what happened to Nathan Dyer last week, we will have to think about what to do in January,” he added.

Michu’s possible lay-off has come at a bad time for the Swans who are mid-table following a run of just two wins in their last nine matches going into the busy Christmas and New Year schedule.

However, Laudrup is remaining positive as he felt his side “deserved more” from their defeat against Everton at the Liberty Stadium.

A Bryan Oviedo own goal had got the Swans level following Seamus Coleman’s opener for the Toffees, but a stunning Ross Barkley free-kick won it for former Swans boss Roberto Martinez’s side five minutes from time.

“We came back and I really thought Everton had settled for a draw with the changes they made,” Laudrup said.

“I feel we deserved more, but we played against a good team in very good form.”