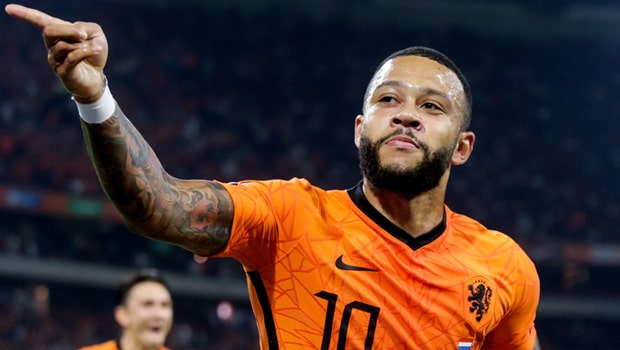 The Oranjes lost the first leg 4-2 in Istanbul in March but the second leg in Amsterdam was over as a contest early in the first half.

Ajax midfielder Davy Klaassen scored as early as the 1st minute and he provided an assist for Depay’s first of the game in the 16th minute.

Depay scored his second in the 38th minute of the game when he scored a penalty.

However, the game totally went the Dutchs way when Caglar Soyuncu got his second yellow card for a second bookable offence.

Nine minutes after the restart Depay completed his hattrick which makes it his seventh goal of the World Cup Qualifiers.

The Barcelona forward who scored a brace in the 4-0 defeat of Montenegro at the weekend also has three assists.

Meanwhile, Turkey falls into third with 11 points and 3 more than Montenegro while Latvia is in fifth with 5 points.

Meanwhile, Atletico Madrid forward Antoine Griezmann scored a brace, a goal in each half, in France’s 2-0 defeat of Finland.

The result puts France a top with 12 points, seven points more than their nearest challenger Ukraine.

Portugal were without Cristiano Ronaldo but they managed a 3-0 defeat of Azerbaijan earlier on Tuesday with Croatia and Russia also winning.