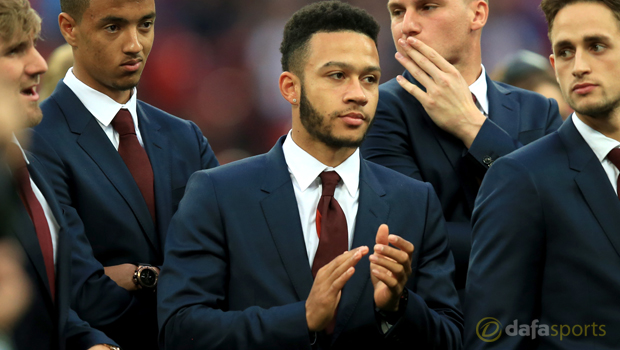 Memphis Depay says it will be “interesting” to work under Jose Mourinho if, as expected, the Portuguese coach is named the next Manchester United manager.

The 53-year-old is locked in talks with the Red Devils following the departure of Louis van Gaal on Monday evening with an announcement expected to be made later this week.

Depay arrived at Old Trafford last summer, fresh from having inspired PSV Eindhoven to the Eredivisie title, and he was expected to flourish under his fellow Dutchman, having impressed while playing for Van Gaal when he guided the Netherlands to third at the 2014 World Cup.

However, it was not to be with the winger failing to make an impact and he was left out of the squad for Saturday’s FA Cup final win over Crystal Palace.

That triumph was not enough for Van Gaal to keep his job and, with a new coach set to arrive, Depay says he is looking forward to getting his United career back on track.

The 22-year-old admits he did not always see eye-to-eye with his former mentor and is excited about the chance to play under Mourinho.

“A love-hate relationship? I don’t know,” he told De Telegraaf. “And now he leaves, as things go in football, as in life, and you learn and you become stronger.

“If the arrival of Mourinho becomes official, I’ll ask Wesley Sneijder what kind of man he is. That’s interesting. It all sounds so, but it is not yet official.”

Manchester United are currently 7.50 to win the 2016/17 Premier League, with local rivals Manchester City leading the betting at 2.63.