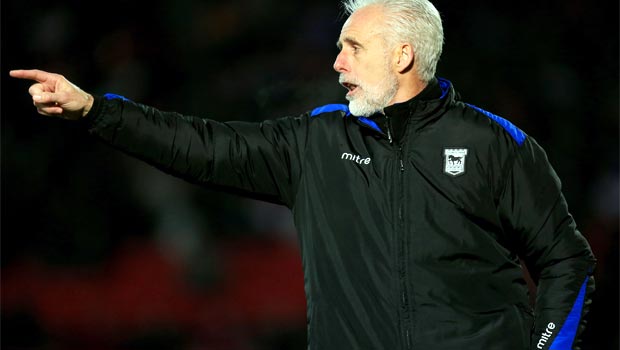 McCarthy underlined the financial realities of promotion-chasing Championship clubs mean that they cannot afford to gamble on a Cup run, when the rewards of reaching the Premier League – even via the play-offs – outweigh the oldest competition around.

McCarthy admits he had Saturday’s Championship match at Millwall in mind when selecting the Ipswich squad for the Deepdale clash, with Luke Chambers, Aaron Cresswell and Cole Skuse all left at home to rest minor injuries.

“Some of them won’t play Tuesday night [in the FA Cup replay against Preston]. But it could mean they can play in the next 10 games and that’s vital for us.”

A fourth-round trip to fellow Championship side Nottingham Forest is the reward for the winners of the third-round replay, but the FA Cup has become something of an inconvenience to managers in McCarthy’s position these days though, with the riches attached to European qualification and Premier League status more attractive than cup glory.

“I don’t think it’s lost its magic, it’s just lost its sense of importance because of the amount of money in the Premier League,” admitted the Ipswich boss.

“I don’t know what you get for winning the FA Cup, but how much is being in the Premier League worth? A hundred million?

“My medals mean a lot to me, but would Wigan – as a club – swap that trophy for still being in the Premier League? Probably, because winning it and getting relegated doesn’t sit well with the accountants.”

And with automatic promotion looking like a distant dream for Ipswich, who are currently ninth in the table and three points off sixth place, McCarthy’s side are targeting the playoffs for their shot at glory and a day out at Wembley.

He continued: “I watched the 2000 Play-Off Final (Ipswich’s 4-2 win over Barnsley) the other day on Sky. It got the juices flowing.

“It seems bonkers that you can finish sixth in the league, win the play-offs and that’s bigger than the FA Cup final. But it is though.”

Preston boss Simon Grayson has been very positive in his comments and selections for the FA Cup and North End, 1.730 on the +0 Handicap, are expected to include veteran striker Kevin Davies for the replay.

The former Bolton Wanderers hitman dropped to the bench at the weekend against Wolverhampton Wanderers but should return to the starting line-up, with midfielder Josh Brownhill also hoping for a recall.

Defender Scott Wiseman is ineligible following his arrival from Barnsley as he wasn’t signed in time for the original third round match at Portman Road.