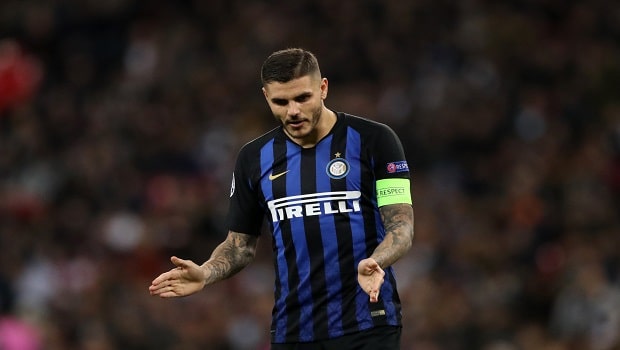 Mauro Icardi’s wife and agent has rubbished reports that suggested the Inter Milan striker could be set for a move to Monaco.

The Argentine striker is expected to leave Inter this summer, but Wanda Nara is insistent he won’t be heading to play for the Principality club.

Rumours in France had stated Icardi, who is facing an uncertain future at the San Siro, had been the subject of a huge offer from the Ligue 1 outfit.

Leonardo Jardim’s side are reportedly seeking a replacement for Radamel Falcao, who has been linked with Turkish club Galatasaray. But Nara has told Tyc Sports that no such move will happen.

“Icardi will not go to Monaco”, she said. Napoli and Juventus remain in the running for the 26-year-old.

Juventus, however, won’t be able to afford his signing unless they can complete the sales of at least two of Paulo Dybala, Gonzalo Higuain and Mario Mandzukic.

In the meantime, Napoli president Aurelio De Laurentiis trying to take advantage of the delay by putting together a €65million package.

Icardi’s relationship with Inter broke down last February when he was dropped by then coach Luciano Spalletti and stripped of his captaincy amid reports of contractual disputes between himself, the club and Nara.

He returned to action before the end of the season, but Inter have made it clear that he no longer features in their plans under new coach Antonio Conte. Icardi didn’t travel with the rest of the Inter squad for their pre-season tour of Asia last month, instead returning to the club’s training base on his own. And he had his old shirt number taken off him, with new signing Romelu Lukaku handed the number nine ahead of the new campaign.