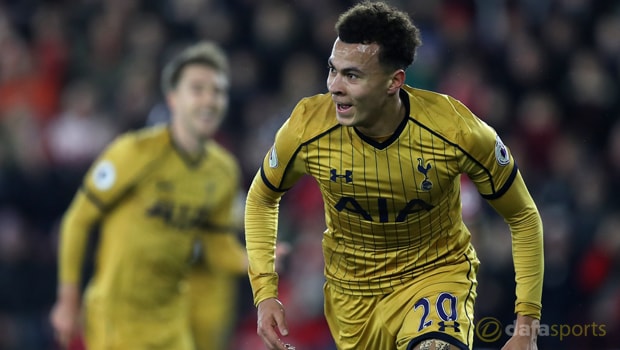 Mauricio Pochettino says Tottenham can expect to put a £50million price tag on Dele Alli because he will develop into a world-class talent.

The 20-year-old made a name for himself in League One with MK Dons before Spurs signed him in February last year although he was loaned back to the club as part of the deal.

The former Liverpool and Bayern Munich target then scored 10 goals in the Premier League in his debut season for the north Londoners, winning last season’s PFA Young Player of the Year award.

Full international honours with England have also come his way and the attacking midfielder has strengthened his credentials as a top-flight player by scoring six goals this season.

Pochettino says at his current rate of progress, Alli, once described by Sir Alex Ferguson as the best young English midfielder to emerge since Paul Gascoigne, can reach the very top.

“Yes [he is a £50m player], why not? Today, Dele Alli is showing a quality, a talent that it’s difficult to find in Europe at 20 years old,” said Pochettino, whose Tottenham side face Watford on Sunday.

“There’s no doubt he is and will be one of the best players in England in the next 10, 12 years. And England represents Europe, and maybe the world, too.”

Alli is under contract at White Hart Lane until 2022, and Pochettino told reporters: “I am very honest in that situation.

Sometimes he will joke in the dressing room or on the pitch, but he’s very serious. “Always I hear him say many times ‘I want to succeed here, I want to win trophies here’.”

Alli is available to back at 2.80 to score anytime against Watford on Sunday.

The home side are quoted 10.00 in the match betting and the draw outcome is available to back at 5.00, with Tottenham currently trading at 3.75.