Matching Lisbon Lions record would be ‘privilege’ for Brendan Rodgers 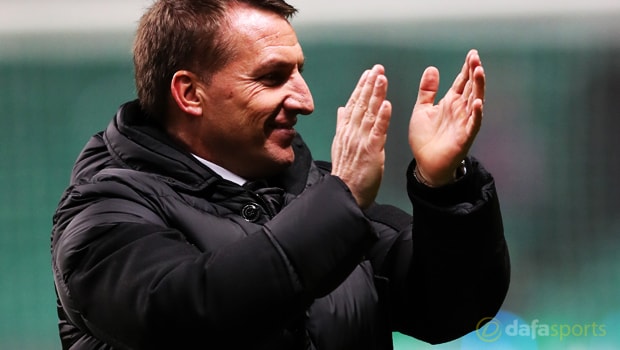 Celtic manager Brendan Rodgers says it would be ‘privilege’ to see his team equal a record set by the iconic Lisbon Lions when they face St Johnstone in Glasgow.

Anything other than defeat for Celtic against Tommy Wright’s team will make it 26 domestic games unbeaten since the start of the season.

That would equal the feat of Jock Stein’s team in 1966/67, when Celtic went on to win a clean sweep of domestic competitions and became the first British club to win the European Cup when they beat Inter Milan 2-1 in Lisbon.

Rodgers is fully aware of just what the Lisbon Lions mean at Celtic and, while he attempts not to consider the implications of the St Johnstone game, he admits it would mean something very special if his players can take a positive result.

“To be talked of in the same breath as guys who created the legend of this club would obviously be a huge privilege,” said the Hoops boss.

“I haven’t really thought of it, to be honest, I just try to look to win our games, irrespective of what the consequences of that means.

“But, of course, anywhere you’re mentioned in the same breath as those guys it is a great privilege.”

Celtic have won 19 of their 20 Scottish Premiership matches so far under the guise of former Liverpool boss Rodgers.

The Bhoys are on course for their first domestic clean sweep since Martin O’Neill led Celtic to a treble in 2000/01.

O’Neill joined Stein as the only managers to lead the Parkhead outfit to three domestic trophies in one season. Celtic are 7.50 to beat St Johnstone 3-0 on Wednesday evening.