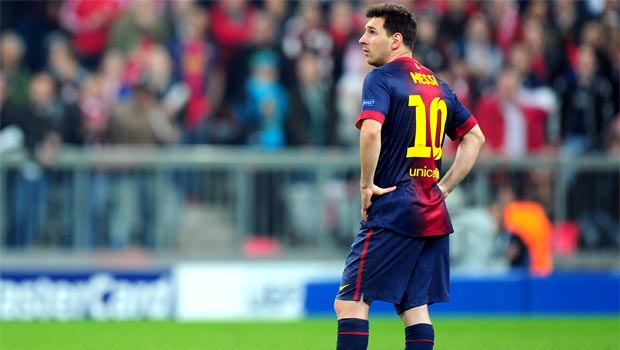 Barcelona coach Gerardo Martino has revealed he is still undecided over whether to pitch Lionel Messi back into the starting line-up for Saturday night’s top-of-the-table La Liga clash against Atletico Madrid.

Barca travel to the capital for the clash with Diego Simeone’s outfit who sit level on 49 points at the top of the table after 18 matches – five points clear of third-placed rivals Real Madrid.

The Catalans were handed a massive boost in midweek when Argentinian superstar Messi returned to action following a two-month hamstring injury lay-off and scored twice in a half-hour run-out as Barca defeated Getafe 4-0 in the Copa del Rey.

Despite that, Martino is unsure if Messi will be able to get through 90 minutes against such strong opposition so will make a decision closer to the kick-off at the Vicente Calderon.

He said: “I think he’s tremendously focused on what’s happening here at Barca and he’s developing after his injury and that’s quite normal.

“Now it’s just a question of whether we think he’s ready to be on the bench for 30-35 minutes and then come on, or play a full 90 minutes.

“We’ll speak to him to see how he’s feeling, because the fact is that when a player starts a game he wants to finish the game.”

Barca are also boosted by the fitness of Dani Alves and Neymar ahead of the game, which is the first league encounter between the sides this term, although Barca defeated Atletico on away goals in their two-legged Supercopa clash in August.

Martino is expecting it to be close again but warned that his Barca side have improved dramatically since that head-to-head.

He added: “We’re very much better than we were five months ago.

“I think Atletico Madrid’s level has never dropped. They started the season at a very high level and they’ve maintained that level over the last five months.”