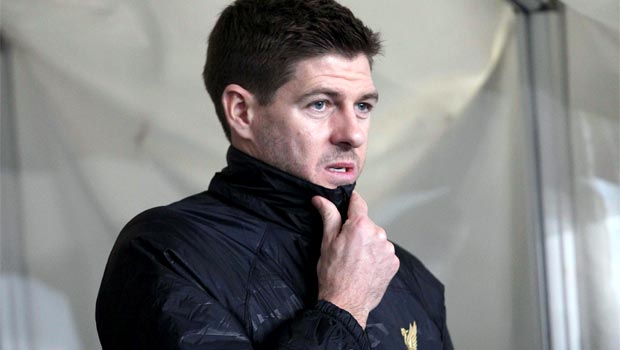 The 33-year-old midfielder has been an influential figure at Anfield for over 15 years since he made his debut as a youngster in 1998. And, having won every honour in the club game, including the

Champions League crown in 2005, the Premier League title is the only one to elude him.

However, Brendan Rodgers’ side have enjoyed a solid first half to the current season and were top of the table on Christmas Day, which statistically leads to being crowned champions at the end of the campaign.

But the Reds were the last team to be in that position and not lift the title back in 2008, so Gerrard knows there is plenty of work to be done to ensure they do not falter twice.

The Merseysiders are now fourth – six points behind leaders Arsenal – ahead of Sunday’s trip to Stoke, where they have not won in the league since 1984, but Gerrard remains hopeful they can pull it off.

“This is probably my best chance to surprise this country and countries throughout the world to maybe nick the Premier League,” he told Sky Sports.

“Sitting here in the middle of January I have a fantastic chance of having a right good crack and getting involved in a title race.

“If we perform like we have done over the last couple of months we can get involved in the title race so that is very exciting.

“It scares me in a way because I don’t know how I’d handle myself.

“When I won the Champions League (in 2005), the week after that talk about being on cloud nine or over the moon – all the clichés – it was better than that.

“If I could add a Premier League title to my collection it would mean the world to me, it would probably be the best day of my life besides my kids being born.

“I think it would top the Champions League because it is the one I haven’t got.”

If the title does slip away Gerrard is adamant that they need to at least get back into the Champions League places after a four-year absence.

“I’d take fourth now,” he added. “We have been out of the Champions League for so long. To have that chance to play a couple of qualifiers against sides you should beat – I’d snap your hand off but I am confident we can finish higher.”