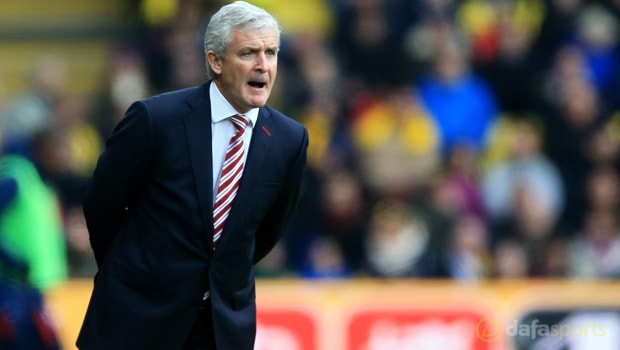 Stoke City boss Mark Hughes says he will be changing a winning formula for the visit of Burnley on Saturday.

The Potters were impressive last weekend as they defeated Watford 1-0 at Vicarage Road but boss Hughes says there will be changes for the clash with Sean Dyche’s side.

Joe Allen, who had been in fine form before suspension, is available, while key defender Ryan Shawcross is battling to be fit.

Hughes has urged his players to be aware of the long, hard road that lies ahead and he says rotation is part and parcel of getting through the season.

“Joe is back available again and there may be changes, which shows the quality of the squad.

If anyone misses out from last week I would say it is going to be a long hard season and we will need everyone,” he told reporters.

After a slow start, Stoke have been beaten just once in eight Premier League games since mid-September. Hughes describes Shawcross as a ‘major doubt’ as he battles a calf problem.

The Stoke boss wants to see more of the impressive play that caused Watford so many problems last weekend. “Our shape or selection probably took Watford by surprise.

It knocked them off the heels somewhat and clearly in the first half they were trying to come to grips with what we were doing. That’s when we scored the goal that won the game,” he added.

Home success against Burnley could hoist Stoke into the top half of the Premier League table for the first time this season.