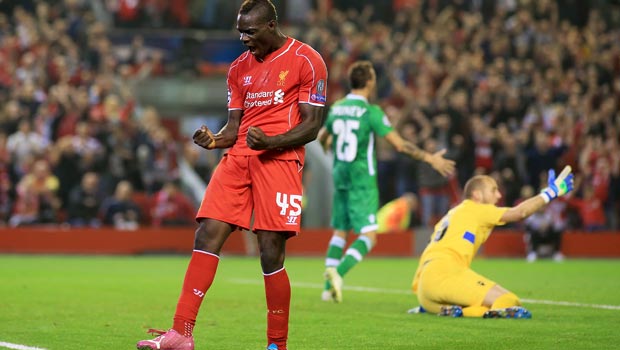 Liverpool boss Brendan Rodgers believes Mario Balotelli will gain a “whole load of confidence” after scoring his first goal for the club.

The Italy international joined the Reds from Serie A giants AC Milan during the summer and opened his Liverpool account with the opener in their 2-1 Champions League win over Ludogorets Razgrad on Tuesday night.

Balotelli led the line for Rodgers’ side in the absence of injured England striker Daniel Sturridge, and the Liverpool boss has backed the former Manchester City forward to continue to find the target after grabbing his first goal for the Anfield giants.

Rodgers feels the 24-year-old is still adapting to his new surroundings, but he insists Balotelli can establish himself as a key man for Liverpool.

“I just feel he needs to be in the box more. Because of his link-up play, he drops in.

“I said to him at half-time ‘just make sure when the ball is in wide areas you’re penalty spot in, rather than penalty spot out’.

“He finds himself pulling back outside the box for the cut-back a lot of the time.

“He’s six foot three and great in the air. When the cross came in, he showed great physical strength, a touch, and then the finish was a brilliant one. It was wonderful technique with the outside of his foot. It’ll give him a whole load of confidence.

“On top of that I thought he worked very hard – he worked and was pressing. He’s still adapting and still trying to get fit because he’s been behind the others in pre-season.

“He showed his quality and that got us the goal.”

Liverpool travel to West Ham in the Premier League on Saturday and they can be backed at 1.77 to secure the win. The Hammers are priced at 4.20 and the draw is 3.75.