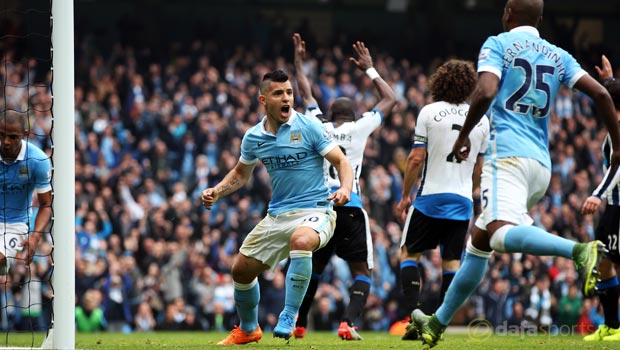 Sergio Aguero has defused any potential argument with Manchester City manager Manuel Pellegrini by insisting the Chilean was right to take him off in the 6-1 win over Newcastle.

Aguero sunk Newcastle as he scored five goals in 20 minutes either side of the half time interval at the Etihad Stadium on Saturday.

Kevin De Bruyne also got in on the act as Newcastle imploded in the second half, having led through Aleksandar Mitrovic’s early goal as half-time approached.

The game changed when Aguero netted from close range three minutes before the break and he sensationally put his name on the scoresheet for more times within 17 minutes of the restart.

Just four players had previously scored five in a Premier League game, and none have managed a double hat-trick, but Aguero was replaced with 28 minutes in the game, denying him the opportunity to fire an historic sixth goal of the afternoon

Wilfried Bony came on for Aguero and afterwards the Argentine said he fully supported his manager’s decision, given that he felt a tweak in his hamstring during the midweek Champions League victory in Germany.

“It was a good decision from the manager to change me because it means no risk,” said Aguero.

“I had a problem with my hamstring in the last game in the Champions League against Borussia Monchengladbach, but now I am feeling good.”

Aguero said the most important thing was getting three points for the team but he was relieved to end a mini goal drought in the league.

“Five goals is good and I am happy,” he added. “I think it was four games without scoring any goals in the Premier League so I am really pleased about my performance.”

Following the demolition of Newcastle, Man City are now 1.67 to win the Premier League this season while Steve McClaren’s team are 2.20 to be relegated.