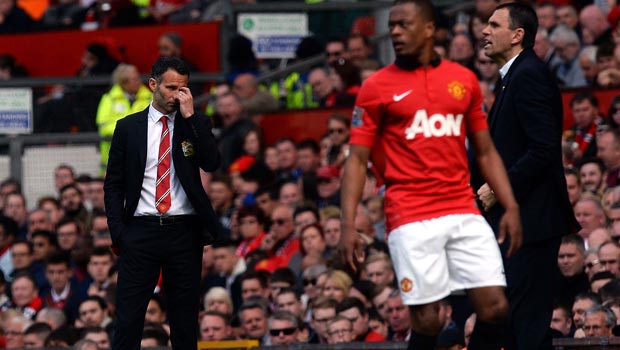 Manchester United interim manager Ryan Giggs was quick to criticise his team’s home form after a disappointing 1-0 defeat to Sunderland at Old Trafford on Saturday.

The Black Cats sent Cardiff and Fulham down into the Championship with the win as Seb Larsson’s goal in the 30th minute was enough to separate the two teams.

An inch-perfect cross from Connor Wickham picked out the Swede in the box and his half volley was too much for David de Gea.

Giggs’ first game in charge saw the Red Devils cruise to a 4-0 win over Norwich, but they were undone by Gus Poyet’s side.

The Welshman was without Wayne Rooney who missed the contest due to a tight groin, but he was quick to show his disappointment in defeat.

He told Sky Sports: “I’m just disappointed, more than angry. We just didn’t show that quality that we showed last week, especially in the final third. When you do that you come unstuck in the Premier League.

“I just didn’t think that there was that concentration today when the passes really mattered.

“When you’ve got to break open a defence, play that key pass, or concentrate on a finish, it just wasn’t there.

“I said last week we want to make it (Old Trafford) a fortress, as it always has been a difficult place to come. This season that has been the problem, our home form hasn’t been good enough.

“Manchester United is a big club. The form hasn’t been good enough this year. I’m sure there will be players coming in, quality players. We need to improve and do better next season.”

Giggs will be hoping to return to winning ways when they welcome Hull to Old Trafford on Tuesday night. They can be backed at odds of 1.80 on a -1, -1.5 handicap.