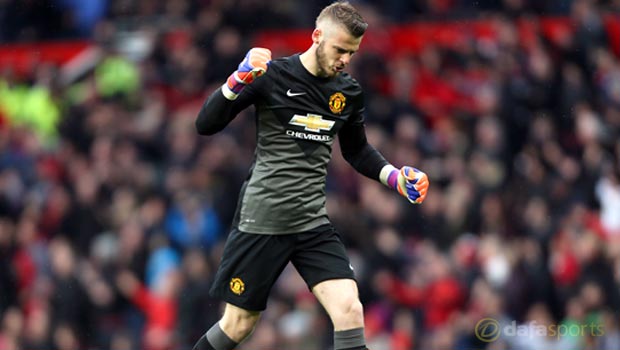 Manchester United midfielder Juan Mata insists he wants David De Gea to stay with the club next season, but admits he must do what makes him ‘happy’.

De Gea has established himself as one of the top goalkeepers in world football since leaving Atletico Madrid for United, who are 5.50 to win the Premier League next season.

The Spain international has made over 130 appearances for the Old Trafford outfit and played an instrumental role in helping them to secure Champions League football next season.

Unsurprisingly the highly-regarded 24-year-old has been heavily linked with an exit over the summer, with Real Madrid making no secret of their desire to sign the stopper.

The United number one will enter the final year of his current deal next month and reports have suggested that De Gea has turned down an extension.

The Madrid-born star is understood to be keen on returning to his homeland to continue his career with Los Blancos and replace the ageing Iker Casillas.

Mata, who plays with De Gea at both club and national level, insists he wants to keep playing in the same team as the keeper, but understands that he must do what is best and be selfish with his decision.

Mata said: “Lots of people ask me about De Gea. He’s a friend and I want him to be happy.

“He’s currently one of the best goalkeepers in the world. From a selfish point of view, I would want to have him in my team.”

The former Chelsea man also handed his backing to new Real boss Rafael Benitez and feels that he will help to bring some silverware back to the Santiago Bernabeu.

He added: “I had him at Chelsea and we won the Europa League. It was a great campaign, my best in terms of statistics.

“Benitez knows how to get the most out of every player and get them performing to their best. Benitez was key for me.”