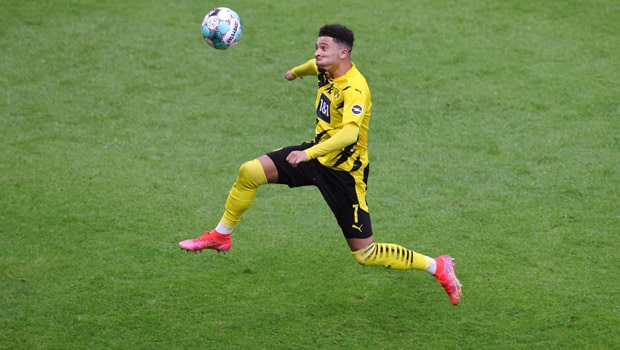 Manchester United has stepped up their pursuit of Dortmund’s English midfielder Jadon Sancho as the Red Devils increased their bid for the former Manchester City midfielder to £72.6m.

United has already had a bid turned down by Dortmund but their latest but is also short of the player’s valuation by the club.

Sancho has not featured prominently for the Three Lions at the Euros but irrespective the Red Devils have been convinced of the player’s performances during the season with 8 goals and 11 assists in the Bundesliga.

Reports reveal that Sancho will leave the BVB arena this summer if the right offer comes as he has a gentleman agreement with the club about a possible exit if his valuation is met.

While reports say that Raphael Varane is very close to joining the Reds, their chances may be scuttled with Real Madrid not ready to do a swap deal involving Paul Pogba.

Real Madrid had initially turned down a bid of £50m from Manchester United hoping to secure a higher bid in the region of £80m.

Pogba and Varane are together with the French national team at the Euros as the Les Blues continue in the round of 16 after as scaling through the group stage.

Meanwhile, developments about Ramos indicate that the World cup winner with Spain in 2010 will turn down a move to the Premier League with Manchester United or Manchester City.

Ramos is also linked with the French side PSG and the defender favors a move to France above the Premier League rivals.

Ramos was allowed to run down his contract with Real Madrid after he rejected a one-year extension with reduced pay but opted for a 2-year deal. He will leave the Capital club when his contract runs out at the end of June.