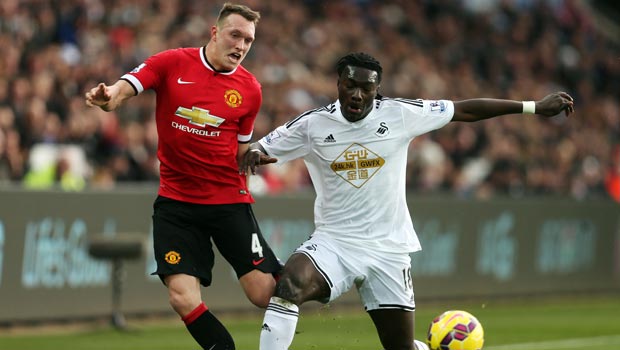 Manchester United defender Phil Jones believes this weekend’s Premier League clash against Sunderland could be a pivotal game in his side’s bid to finish in the Champions League places this season.

United are still chasing a top-four finish this season but their hopes took a hit last weekend as they slipped to a 2-1 defeat at Swansea City.

It leaves Louis van Gaal’s side fourth in the table, with just three points separating them and seventh-placed Tottenham.

With Arsenal, Liverpool and Southampton also in the race for next season’s Champions League, Jones believes United must get back to winning ways against Sunderland on Saturday.

“It’s an important game for us,” said the England centre-back. “It won’t be easy, Sunderland are a tough team, but we’ve done well at home recently and we need to bounce back from the defeat at the weekend.

“It’s never nice to lose a game. We thought we played reasonably well, especially in the second half, but this will be another difficult match for us and one we need to win.”

Sunderland and Manchester United drew 1-1 in the reverse fixture at the Stadium of Light in August, with Jack Rodwell equalising for the hosts following Juan Mata’s opener, while the Black Cats beat a Ryan Giggs-led United side 1-0 last season for their first win at Old Trafford since 1968.

The y appear to be somewhat of a bogey side as they had also knocked the Red Devils out of the League Cup on penalties when their semi-final had finished all square on aggregate over two legs last January.