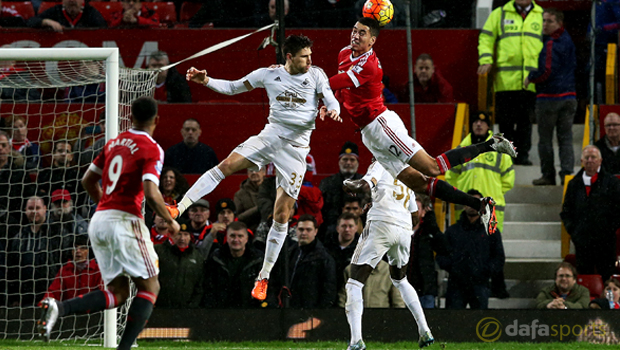 Chris Smalling has urged Manchester United to build on Saturday’s 2-1 victory over Swansea following their poor recent run of form.

The Red Devils, who are 19.00 to win the Premier League, went into the match without a win in their previous eight games, a run that saw them drop out of the top four and eliminated from the Champions League.

However, goals from Anthony Martial and Wayne Rooney made the difference as the Old Trafford-outfit finally ended their drought.

United’s poor form has seen boss Louis van Gaal’s role at the club come into question but following talk of him being dismissed, Saturday’s victory appears to have given him somewhat of a reprieve.

Van Gaal’s men have the perfect chance to continue building their confidence next weekend when they take on Sheffield United in the FA Cup, a tournament they are currently 8.50 to win.

After their difficult recent run, Smalling admits that it was a relief for his side to finally get back to winning ways on Saturday and says it is vital they kick on.

“We’ve tried to work hard on the training pitch,” he told MUTV. “December was a poor month and it’s a great feeling to get that win. I think, especially in the last couple of games, we’ve fought hard and we need to kick on like we did today.

“As players, we knew we had to stop that run and get on the front foot. We did that today and then, in the second half, they tired because we really did press them. It was a good start to the year and we can’t afford any more slip-ups now, so we need to make sure we keep playing like this.”