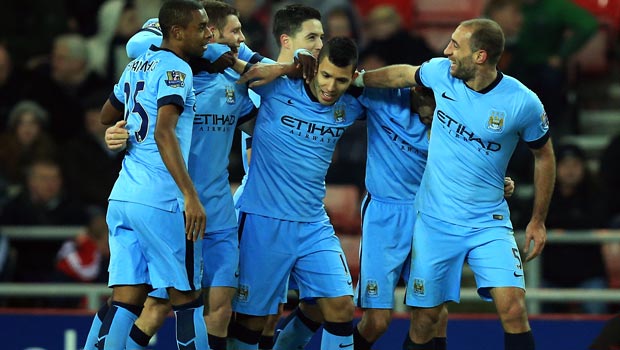 Stevan Jovetic is relishing the return of Sergio Aguero to the Manchester City side as they look to keep pace with Chelsea in the Premier League title race.

Aguero began the season in superb style, with 14 goals from 15 top-flight appearances, before damaging knee ligaments in the 1-0 victory over Everton on December 6.

The Citizens have had to play without a recognised striker at times, with both Edin Dzeko and Jovetic also crocked, and James Milner has been ploughing a lone furrow up front on occasions.

The injury crisis has not seemed to affect City, however, as they have won four and drawn one of their five Premier League games without Argentina international Aguero to sit level on 46 points with Chelsea.

And things look like improving even further as Aguero is now back in training and Jovetic feels his return cannot come too soon.

“Sergio was in the form of his life when he damaged his knee against Everton and it’s such a pity that he picked up his injury when he did,” he told the Daily Mirror.

“It’s been said many times lately, but he is one of the best players in the world and we all hope he will be back very soon.”

Manager Manuel Pellegrini has reacted to the shortage of forwards by targeting Swansea’s Wilfried Bony and, if reports are to be believed, the Ivory Coast international striker could arrive at the Etihad Stadium sooner rather than later.

That would mean that Jovetic would be further down the City pecking order and it could hasten his exit from the club.