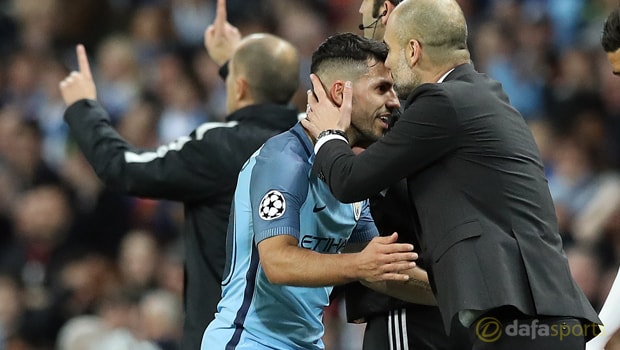 Manchester City striker Sergio Aguero insists he wants to stay with the club and he has played down reports that he has a poor relationship with manager Pep Guardiola.

The Argentina international has been in and out of the team this season, with Guardiola happy to use a number of different systems since taking charge in the summer.

January signing Gabriel Jesus soon found his rhythm and Aguero was linked with a move away, but Jesus’ recent injury has given Aguero a chance.

He grabbed it with both hands on Tuesday night as City beat Monaco 5-3 in the Champions League, with Aguero scoring twice.

The 28-year-old continues to be asked about his future but he plans to stay put as he looks to win the Premier League, which you can back City to do at odds of 8.50.

When asked about his relationship with Guardiola, Aguero said: “The truth is we get on very well. “What he wants, above everything, from all the players is that we push a little more.

He’s always asking me for more, more, more. “Obviously it’s a sacrifice I have to make, that we all have to make, and fortunately tonight it worked and we’ll see if it keeps working in the next game.

The truth is that with these things it’s the club that handles everything, and obviously it’s always my intention to stay.”