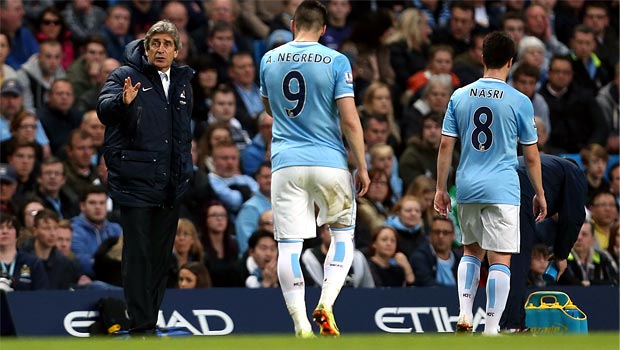 Manchester City boss Manuel Pellegrini insists that his players still believe they can claim the Premier League crown this season, although their destiny remains in the hands of Liverpool.

City have four games remaining of the 2013-14 campaign and head into the run-in sitting in third place, six points adrift of leaders Liverpool but with one game in hand.

However, the Citizens could be handed a huge lifeline this weekend if the Merseyside outfit are beaten at Anfield by second placed Chelsea.

The Chilean has enjoyed some success in his first campaign in English football, helping the club to secure the Capital One Cup with victory over Sunderland at Wembley but he believes it would be wrong to rule out the possibility of adding the league title to the cabinet as well.

Pellegrini said: “I think everyone that is working in football knows everything can happen.

“Liverpool have to win their last three games. If they win their three games of course because they are top of the table. They have the first chances to win it bit for that they must win the games.”

The north-west club lost ground in the title race after losing 3-2 to Liverpool and then being held to a 2-2 draw by relegation-threatened Sunderland.

Pellegrini’s side responded from two poor results by seeing off West Brom on Monday and the former Real Madrid boss is delighted to have his team firing on all cylinders once again.

He continued: “In the last three games against Liverpool I think we played very well.

“I don’t always want to have different reasons for the result but it was a very special day for Liverpool.

“We lost 3-2 but I don’t think we played bad or deserved to lose. Against Sunderland maybe we couldn’t recover for such an important game in three days but I think we played well in our last game against West Brom.”

The Citizens are favourites at 1.41 as they travel away to an in-form Crystal Palace, who are priced at 7.27 on Sunday, before taking a trip to Goodison Park and Everton a week later.

After that crucial double-header, City close out their season with successive home fixtures against Aston Villa and West Ham.