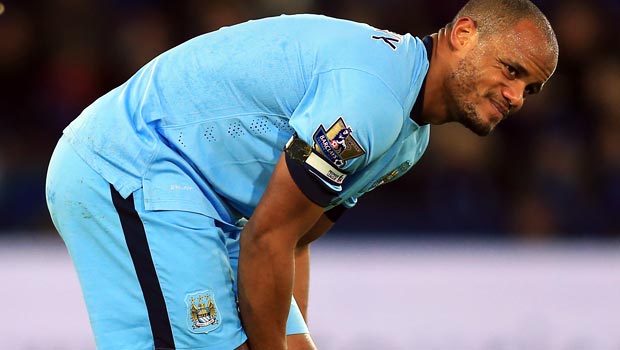 Manchester City are set to be without striker Edin Dzeko and skipper Vincent Kompany until the new year after both picked up knocks during Saturday’s trip to the King Power Stadium.

City – priced at 13.00 to win the Champions League – lost Dzeko in the warm up after the Bosnian striker pulled up complaining of a problem with his calf, forcing boss Manuel Pellegrini to turn to youngster Jose Angel Pozo.

Pellegrini’s injury crisis grew even worse when Kompany had to leave the field with a hamstring injury with 14 minutes remaining.

The Chilean confirmed at full time that things did not look positive for the duo and, although he will need to wait for test results, he expects they will be unavailable for the busy Christmas period.

Dzeko’s injury means that the Citizens are now without a senior striker, with Sergio Aguero and Stevan Jovetic also currently on the treatment table.

The former Malaga boss admitted that he may be forced to dip into the transfer market in January as he looks to provide some cover in attack.

Pellegrini said: “Of course now we are without Aguero, Dzeko and Jovetic for more than a couple of weeks.

“It’s a difficult situation but we will see the best way to resolve it.”

The 61-year-old revealed that Kompany had confirmed he was ready to feature in the game after recently returning from injury, but he admitted that the game may have come too soon.

He added: “I think he felt again a problem in his hamstring.

“That is why he didn’t play on Wednesday because it was too soon. He thought he was ready to play today. Vincent said he was available to play but could not play the whole game and we see what happened to him.”