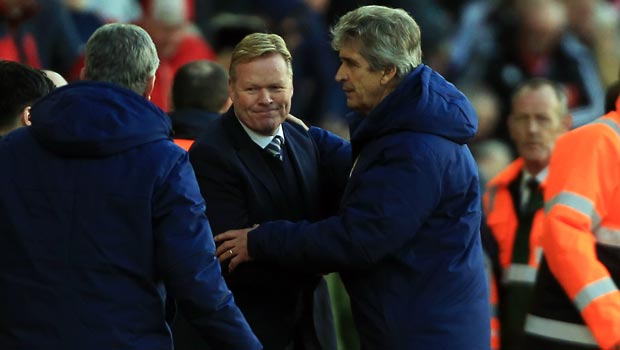 Goals from Yaya Toure, Frank Lampard and Gael Clichy helped the Premier League champions to a comfortable victory on the south coast, despite being reduced to 10 men in the second half when Eliaquim Mangala was sent off.

The win moves City up to second in the table, six points behind unbeaten leaders Chelsea, and has filled Pellegrini with confidence they can still challenge for the title.

“We can complain about a lot of things from this team this year,” he said.

“But the only thing we cannot complain about in the squad is the spirit, the personality, the character and the ambition to continue winning.”

The Premier League season is just 13 games old and Pellegrini is refusing to concede the title to Jose Mourinho’s side just yet, insisting there is still a long way to go.

“We have to play 25 games more. It is a lot of points and nobody knows what will happen in the future,” he added.

Chelsea were held to a goalless draw at Sunderland on Saturday and City are the next visitors to the Stadium of Light on Wednesday, while the Blues are at home to Tottenham Hotspur.

“In football in one week you can change your position,” said Pellegrini. “Chelsea are playing very well and we will see what will happen. We must try to concentrate just on Sunderland.”