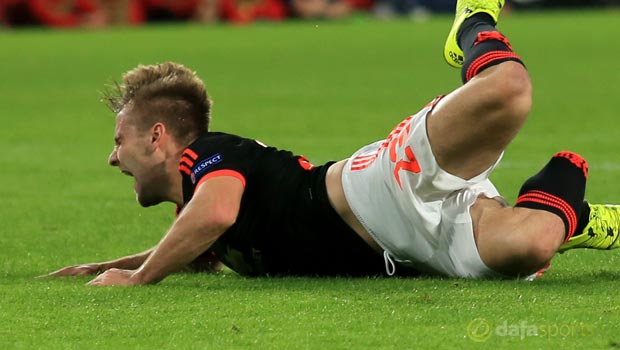 Manchester United boss Louis van Gaal has conceded the loss of left-back Luke Shaw to injury is a massive blow but feels the club do have replacements waiting in the wings.

United will head to Shaw’s former club Southampton on Sunday but they will do so without the England defender who suffered a double leg fracture in their Champions League defeat at the hands of PSV Eindhoven in midweek.

The 20-year-old is set to return to the UK from the Netherlands on Saturday, having undergone two operations on his leg.

Following a strong start to the season for the Three Lions starlet, the loss of Shaw for the foreseeable future has given Van Gaal a headache in selecting a replacement left-back.

However, with Daley Blind, Marcos Rojo and Ashley Young in the squad at Old Trafford, the Dutch tactician believes there is sufficient cover for the coming games, or at least until the January transfer window.

“We have to cope with it but it is a big loss,” Van Gaal said.

“It is not a problem but Shaw is the line-up player and it is very difficult to replace him when he is in such a good shape.

“In Blind, Rojo and Young, we have good replacements.”

United romped to a 3-1 victory over rivals Liverpool in their last Premier League outing but face a tricky clash on the south coast with Southampton this weekend.