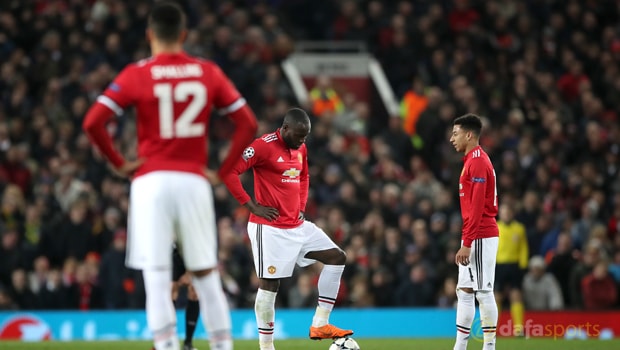 Manchester United striker Romelu Lukaku says the club can get over their Champions League exit by winning the FA Cup.

Jose Mourinho’s men were dumped out of the Champions League at the last 16 stage by Sevilla, who claimed a 2-1 win at Old Trafford after a goalless first leg in Spain.

Several fans were unhappy with Mourinho’s tactics, accusing the Portuguese manager of setting up his team too defensively and not having enough going forward.

Lukaku pulled a goal back late on to make the score 2-1 but a turnaround looked unlikely and United still haven’t reached the quarter final stage of the Champions League since Sir Alex Ferguson retired.

The Belgian forward, who cost Manchester United an initial £75million in the summer, says that while the squad is disappointed to go out of the Champions League, they can come back to win the FA Cup.

“It is difficult for us,” Lukaku told the club website. “But we have to bounce back. We have one trophy to chase and that is the FA Cup.

“We wanted to go far in the Champions League, that is what a club like Manchester United needs to do and we didn’t do it so we are disappointed.

“We should have done much better. With the quality that we have in the team, I think that we should have gone through. But we didn’t deserve it because we were not good enough.”

United take on Chris Hughton’s Brighton in the quarter finals as they look to win their second FA cup in three years after beating Crystal Palace 2-1 in 2016.