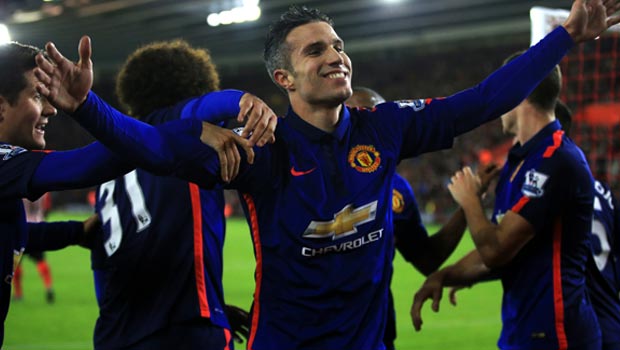 Manchester United striker Robin van Persie insists his side is heading in the right direction and can extend their winning run to six when they host Liverpool this weekend.

United have surged up to third in the Premier League table with victories over Crystal Palace, Arsenal, Hull, Stoke and Southampton, with Van Persie the difference against Saints on Monday as his brace secured the win.

The Old Trafford side host fierce rivals Liverpool on Sunday and they can put a real dent in the visitors’ own top four hopes with a victory, and Van Persie hopes United can extend their winning streak.

“The next game is Liverpool so we’re looking forward to that. We are really happy that we are on the way up now. We have to keep the momentum going,” Van Persie told United’s official website.

The Netherlands international’s form has been questioned in recent weeks and United manager Louis van Gaal even admitted Van Persie had a “very bad game” against former side Arsenal last month.

However, Van Persie insists he is close to rediscovering his best form and is confident more goals will come after his double at St Mary’s on Monday.

He added: “I’ve been feeling very well over the last couple of weeks. Physically, I can make my runs over and over again. I had a feeling that it was coming.

“Last week, I was thinking against Stoke that I had a really good feeling; I was feeling fit. Although I had a good feeling, not everything came together in that game.

“Today [on Monday], overall, we can be happy and I can be happy as well. I can play 90 minutes easy and every time it gets easier – tonight as well. I could keep going in the last minutes and that’s what you want. Then the goals, assists and wins will come. I just have to keep it going and play more.”

United could be boosted by the return of Angel Di Maria from injury when Liverpool visit on Sunday following a hamstring problem, while Radamel Falcao could be involved after he was an unused substitute at Southampton.