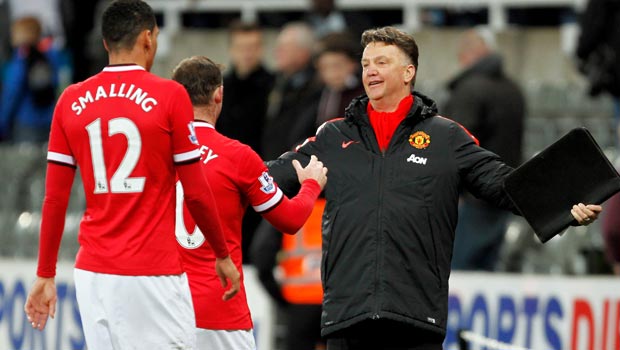 Manchester United manager Louis van Gaal has said Manchester City can forget about the Premier League title because they are now involved in the “rat race” for a top-four finish.

A 1-0 defeat by Burnley on Saturday means the champions now trail leaders Chelsea by six points and van Gaal thinks the gap is too big to catch Jose Mourinho’s table-toppers.

Van Gaal, speaking after his side strengthened their own top-four ambitions with a 3-0 win against Tottenham, said Manuel Pellegrini’s men are now involved in the race to secure Champions League football for next season.

“Whether they want that or don’t want that, that is the position,” van Gaal told reporters. “It is a rat race. They are in it.”

Arsenal are a point behind City in third place while United are now just two points off their local rivals.

Victory on Sunday against Mauricio Pochettino’s men at Old Trafford was arguably United’s finest so far this season.

Next up for the former champions is a trip across the East Lancs Road on Sunday to face bitter rivals Liverpool at Anfield. The Merseysiders are currently priced 2.23 in the match betting and the draw outcome is quoted 3.40, while the visitors can be backed at 3.05.

Van Gaal felt his players had removed some of the recent criticism of their performances and was delighted with the team ethic.

“We have waited a long time for such a victory and it was better because the performance was good against a very good team,” added the former Netherlands coach.

“I was very pleased, but I’m not sure if it was our best. You have to watch it again on video, but we played like a team, very determined after a defeat like we had against Arsenal [in the FA Cup], that we lost because of ourselves.”