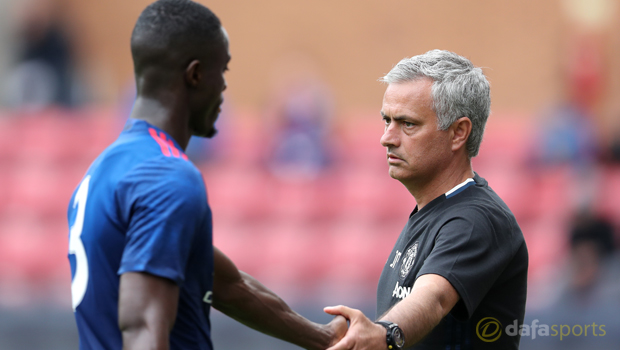 United forked out a reported £30million to snare Bailly from Spanish side Villarreal earlier this summer.

Mourinho feels the 22-year-old Ivorian is still developing and doesn’t necessarily expect the defender to have an immediate impact in the Premier League, but he insists the future is bright for Bailly.

The former Chelsea and Inter Milan boss says his proven track record of helping defenders reach the top of their game will aid Bailly’s improvement, and cited Raphael Varane’s rise to prominence during his spell with Real Madrid as an example.

Bailly made his United debut in a 2-0 friendly win over Wigan at the weekend and Mourinho was happy with his contribution.

He told MUTV: “I will give him [Bailly] everything to try to make him better and better, like I did with other central defenders I’ve had in my hands.

Like, for example, Varane, and I will try to make him the best I can.

He added: “For Eric, this was the first time he has worn a shirt like the Manchester United shirt.

He can’t speak English and can only communicate with the ones who are French speakers or Spanish, so for him it’ll be step by step and that’s why I gave him more than 45 minutes.

“I wanted to give him more minutes because he needs to play more than others. He needs to feel it and start communicating.”

Manchester United are 4.50 to win the Premier League outright and 1.85 to win their season opener at Bournemouth on August 14.