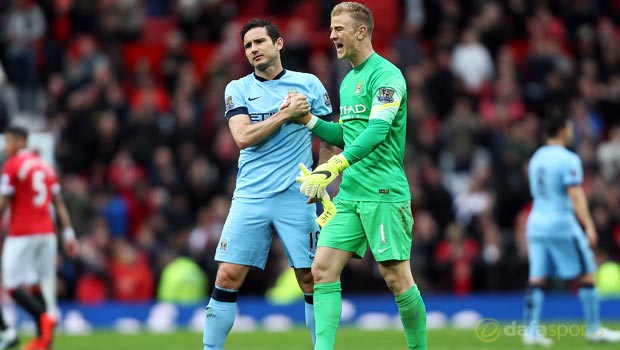 Joe Hart is desperate for Manchester City to bounce back after a disappointing derby defeat at Manchester United on Sunday.

The reigning champions saw their title defence effectively ended at Old Trafford on Sunday despite taking an early lead, as United claimed a 4-2 victory.

The result leaves City fourth in the Premier League table, 12 points behind leaders Chelsea and four behind United in third.

City have now lost four of their last six games and Hart is desperate for them to go on a winning run in their remaining games, with the England goalkeeper at a loss to explain his side’s recent struggles.

Reflecting on the derby, Hart told the Manchester Evening News: “That’s one of my worst in a Man City shirt, definitely.

“It’s hard to take. We’ve won enough of them to know how to lose properly though and we weren’t good enough after the first 15 minutes.

“We let ourselves down and we let our supporters down. But there are six games to go now and they are so big for us.”

He added: “It would be easier to win games if I knew what was wrong with us but we’ve played well and been unfortunate in some games.”

City were level on points with Chelsea at the turn of the year but a run of just four wins in their last 15 games in all competitions has left them facing the prospect of a season without silverware.

Manuel Pellegrini’s side could even slip out of the top four if they do not rediscover their form soon, with City just five points clear of fifth-placed Southampton – who visit the Etihad Stadium in the final round of fixtures.

City are 1.25 to beat West Ham in their next league fixture, while Sergio Aguero is 1.80 to finish as the Premier League’s top scorer.