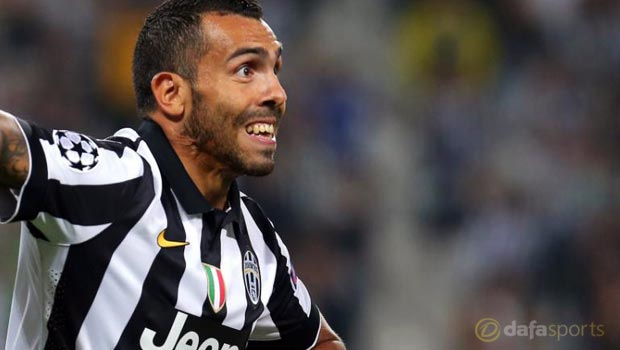 Carlos Tevez insists his Juventus side can secure the Champions League title this season.

The Italian giants have been drawn against surprise package Monaco in the quarter-finals, having overcome Borussia Dortmund in the last 16, and host the French outfit in the first leg on Wednesday.

The Argentine striker was a member of the Manchester United side that secured Europe’s top prize in 2008.

Tevez feels Juve are a very different side to United, but claims they make up for a lack of star names by being a strong and well-organised unit.

“Dortmund has shown that we can go far. It only depends on us. Juventus can beat anyone and we’ve shown that. Nobody is out of our reach,” he told La Repubblica.

He added: “That (2008) was a different situation. There were some amazing examples; Cristiano Ronaldo, Wayne Rooney, Ryan Giggs, Rio Ferdinand, Paul Scholes.

“I think that now there is a team instead. We are very hard to beat.”

Tevez has managed 25 goals in all competitions this term, but he insists his team-mates and manager Massimiliano Allegri deserve to share the praise for his exploits.

He said: “My team-mates and Allegri give me so much confidence. I’m happy with how the coach asks me to play.

“We made some kind of deal: when I get the ball I can do whatever I want but I have to perform very specific tasks in defence.

“I like being in contact with the ball. If you don’t give it to me, I’ll get it.”

Juventus are 1.50 to beat Monaco on Wednesday and 8.00 to win the Champions League outright, with Monaco 67.00 to win the prestigious European competition.