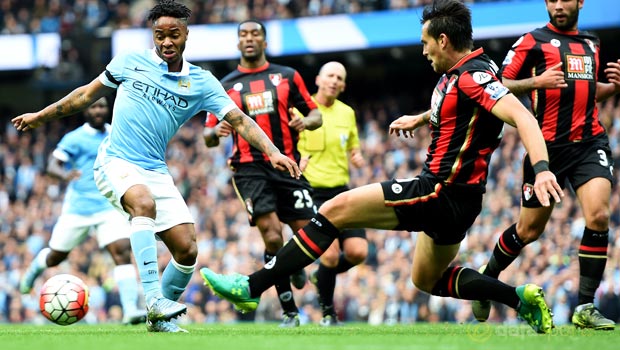 Raheem Sterling struck the first hat-trick of his career as Manchester City thrashed Bournemouth on Saturday, but the England international has pledged to continue working on his finishing in a bid to prove the doubters wrong.

The 20-year-old moved from Liverpool to City for £49 million during the summer and has made a decent start to life at the Etihad Stadium.

Throughout the youngster’s career to date, his finishing has been one area in which he has been regularly criticised, with many calling for Sterling to become a more potent striker if he is to ultimately fulfil his undoubted potential.

With Sergio Aguero set to miss a month of action with a hamstring injury and David Silva also on the sidelines, the pressure has been ramped up on Sterling to provide goals and he rose to that challenge against the Cherries.

However, Sterling is committed to keep working hard in order to increase his potency in front of goal.

“I definitely work on my finishing. I get a quite lot of chances and it’s something I’ll keep working on and hopefully get better at.”

City manager Manuel Pellegrini praised Sterling’s performance, but also pointed out the chances he did miss as well as those he didn’t.

“With his movement we thought Raheem could be dangerous,” said the Chilean. “He also missed three or four goals but he did very well.”

Next up for City is a Champions League clash with Sevilla on Wednesday at home before the small matter of a Manchester derby against United next weekend. United are the marginal 2.50 favourites to win, while City are available at 2.70 and the draw is at 3.30.