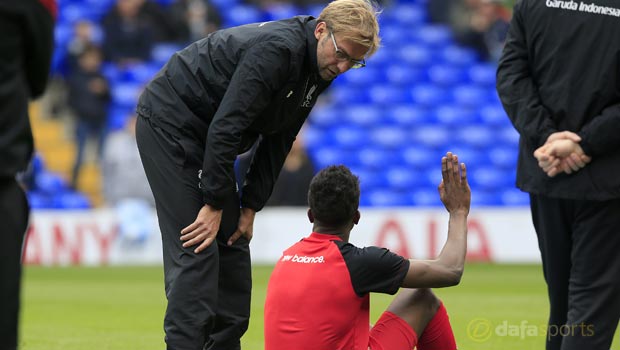 Liverpool forward Divock Origi reckons Jurgen Klopp’s influence is already coming through at the club and that showed in their performance at Spurs.

The German manager made his first appearance in the Liverpool dugout at White Hart Lane and he watched his new team draw 0-0 with Tottenham to earn a point.

It was obvious that Klopp had instilled a new work-rate and ethic throughout the side, something that was lacking during Brendan Rodgers’ final few games in charge.

Liverpool pressed high up the pitch and showed a great intensity and work-rate throughout, but were also thankful to goalkeeper Simon Mignolet for keeping them in the game.

Origi made his first Premier League start for Liverpool due to injuries to Daniel Sturridge, Danny Ings and Christian Benteke and he worked as hard as anyone to take Klopp’s philosophies onto the pitch.

The Belgian told Liverpoolfc.com: “[Klopp told us] just to play with passion and no fear. He believes in everybody – the young players, the old players, we’re all here because we have quality.

“We just have to work hard and trust him, and we all trust him so I think we can have a good season.

“When you look at the coach, he sends out a very strong feeling, a very powerful feeling. You can see it through the team.

“Today we had a lot of energy, we pressed, we played with a lot of joy. We are a very strong together as a club with the fans also, it’s a very nice thing.”

Liverpool face Rubin Kazan at Anfield in the Europa League on Thursday and the Reds on offer at 17.00 to win the competition outright.