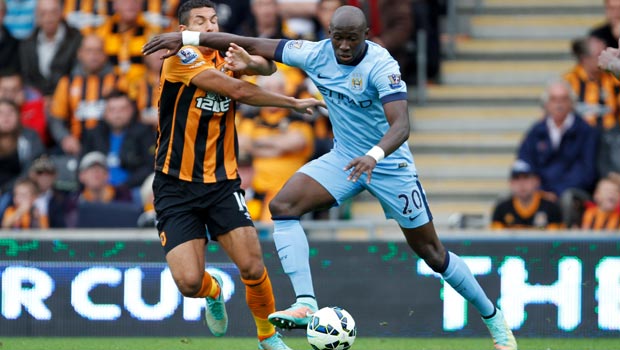 The France international, who cost £32million in August, scored an own goal and gave away a penalty before half-time at the KC Stadium as the Premier League champions surrendered their early two-goal advantage.

Manuel Pellegrini’s side fought back to win 4-2 and end a three-game winless streak in the Premier League thanks to second-half goals from Edin Dzeko and Frank Lampard.

But Kompany was impressed with Mangala’s attitude after the double setback to ensure that City sealed all three points.

“As defenders, we have to deal with this, it’s part of the job,” said the City captain. “I always look at the reaction and we saw it from him in the second half.

“It could have been so dangerous because it had gone two-all, you’ve got time to think about it in the dressing room, but he just got on with it and stood up to the task.

“The rest of the game, he played well, he stayed professional.

“You could not have asked for more. The main thing is to stick to your job, sometimes you get half an hour like this.

“I’ve seen in him a great reaction and in the second half he was spot on.”

Mangala looks likely to lose his place for the crucial Champions League home clash with in-form Roma on Tuesday as Pellegrini prepares to recall the experienced Martin Demichelis.

City cannot afford anything other than a win after Group E rivals Bayern Munich and Roma both won their opening matches while City lost 1-0 at the Allianz Arena.

Pellegrini’s men are the 1.65 favourites to take three points while Roma, who won 2-0 at home to Hellas Verona on Saturday, are 5.05 to stun the City faithful with an away win.

The draw is available to back at 3.76 but City have not drawn any of their last 10 Champions League matches.