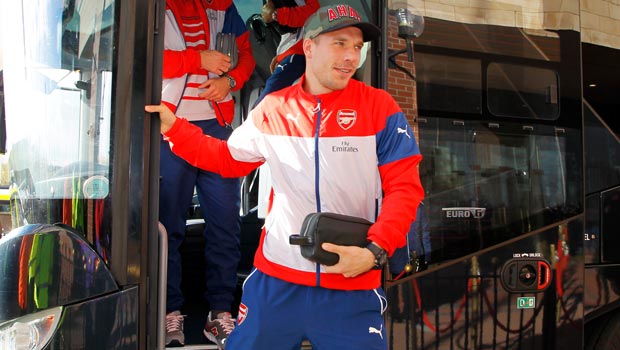 Arsenal forward Lukas Podolski may have to leave the Gunners if he is to maintain his place in Joachim Low’s national squad, according to former Germany boss Rudi Voller.

The 29-year-old has endured a frustrating campaign for both club and country following on from Germany’s World Cup success in the summer.

The former Cologne star has only started two games for either side this season, making a further 11 substitute appearances, but he failed to take advantage of a rare starting birth for his country when he was unable to score against European minnows Gibraltar in Nuremberg on Friday.

Former coach Voller, who had Podolski in his national squad for Euro 2004, believes it is testament to the former Bayern Munich player that he is still involved in the national set-up despite falling down the pecking order at the Emirates.

He said: “Lukas is a very good player who always faces up to the challenge. Competition has got fiercer, but it says a lot that he is still always involved (for Germany). Of course it’s an advantage for a player’s self-confidence when he is playing regularly, though.”

Current German boss Low has openly admitted in recent weeks that the attacker’s role within the international set up may have to come under consideration if he doesn’t play more regular first team football, with the player himself now considering his future going into the New Year.

The forward said: “It’s just the case that I’m lacking a rhythm and this is down to the fact that I am not playing regularly for my club.”

The World Cup winner also claimed the FA Cup with Arsenal last season, but if he is to stay with the Gunners past January he may struggle to add a Premier League title to his trophy case with the north London club 36.00 to secure what would be their 14th English crown.