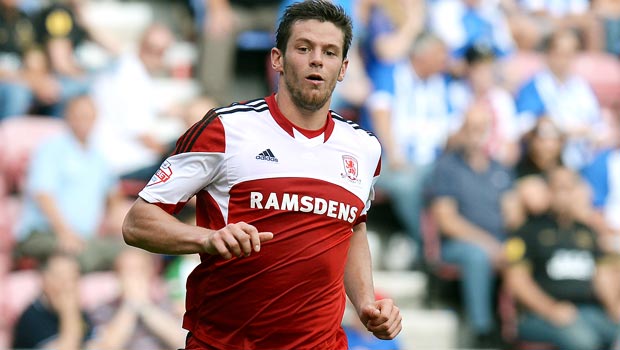 Lukas Jutkiewicz wants to play a key role in helping Burnley survive in the Premier League next season after he moved to Turf Moor on a three-year deal from Middlesbrough.

The 25-year-old striker agreed the move to the Clarets on Monday and successfully passed a medical before jetting out to link up with the rest of Sean Dyche’s squad on their pre-season tour of Austria, while the club confirmed his arrival on Tuesday afternoon.

It is believed that the Clarets have agreed to pay Boro £1.5million for Jutkiewicz with the potential to rise to £2.25million with incentives including appearances.

The former Everton forward joined Boro in January 2012 for £1.3million from Coventry City and managed 10 goals in his first full season in 2012-13 despite suffering an injury setback at the start of the campaign.

After falling out of favour last season when the sacked Tony Mowbray was replaced by Aitor Karanka in November, he was subsequently loaned out to Championship side Bolton in January.

Jutkiewicz enjoyed a successful spell with the Trotters where he scored seven goals in 20 appearances, but their boss Dougie Freedman was unable to meet Boro’s asking price so the Clarets stepped in to snap him up.

The “delighted” Southampton-born hitman is now looking forward to helping the Clarets make an impact in the top flight after they won automatic promotion behind Championship winners Leicester last season.

He told the club’s website: “I’m looking forward to the season ahead and hopefully making a big contribution to the team.”

Burnley, who are 1.55 to be relegated after just one season in the Premier League, will face Chelsea at Turf Moor in the first Monday night game of the new season on August 18 and they are 6.66 to win the match. Chelsea re 1.389 and the draw is 4.34.