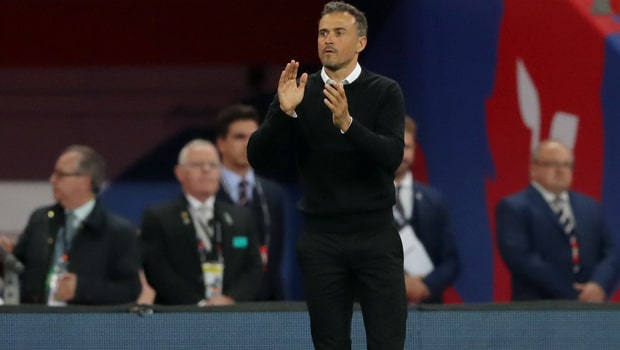 Spain boss Luis Enrique was left delighted as his side secured a 6-0 triumph over World Cup finalists Croatia in their UEFA Nations League clash in Elche on Tuesday.

La Roja produced a scintillating display at the Estadio Manuel Martinez Valero, as strikes from Saul Niguez, Marco Asensio, Rodrigo, Sergio Ramos, Isco and an own goal helped them complete a comprehensive victory.

However, the scoreline did not tell the whole story, as Croatia had created a number of opportunities during the opening exchanges, but the game appeared to turn on it’s head when Saul grabbed the opening goal on 24 minutes.

Enrique conceded after the match that it had been difficult for his side to get going, but once the deadlock was broken he had nothing but good things to say about their performance.

“We were facing Croatia, a team who press very well, and it was difficult for us to get the ball out. Everything changed as of the 20th minute,” Enrique said.

“We had fast, direct football, with good work between the lines. Ramos made the changes of direction, Asensio was tremendous with his goals and passes, we had the success and speed of Rodrigo, Busi distributing the ball… I’ve nothing to object about. I liked almost everything.”

Enrique has now won both of his matches since being appointed Spain manager and it appears La Roja are banishing some of the demons from their disappointing World Cup display.

Spain have not made it beyond the last-16 stage of a major international tournament since 2012, but they are priced at 3.75 to become the inaugural winners of the UEFA Nations League.