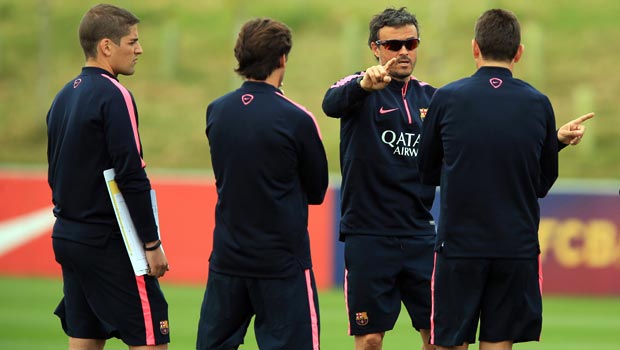 Luis Enrique has defended his tactical rotation policy at Barcelona after a late 1-0 win at Valencia on Sunday.

The Asturian coach raised eyebrows with his team selection at the Mestalla as he left Ivan Rakitic on the bench, moved Xavi to the left and played Sergio Busquets – who scored the 93rd-minute winner – in an advanced role.

His selection was questioned ahead of the big game with Barcelona needing to inflict a first home defeat of the season upon Valencia in order to stay within reach of Real Madrid at the top of La Liga.

But after snatching all three points in stoppage time Enrique is confident he got his tactics right and insists the decisions he makes are for the long-term benefit of the team.

“I’m convinced that the best way to get to the end of the season is by playing as a team and using as many players as possible in the best way we can,” said the former Celta Vigo boss.

“I have always done that as coach, and so far it has not gone too badly for me – I’m Barcelona coach.”

Barcelona had over 70 per cent of possession throughout the game and Luis Suarez had a goal wrongly ruled out for offside.

“This team is ready to go hand-in-hand right until the end to get the win. We got our strategy right and managed to control the game,” Enrique added.

“We still need to improve, but so does every team in the competition. We’re on the right track.”

Enrique’s side are next in La Liga action in a home Barcelona derby with Espanyol.

Barca are undefeated against their local rivals in the last five seasons and are 1.10 to win, while a draw is 8.80 and Espanyol are 21.15.