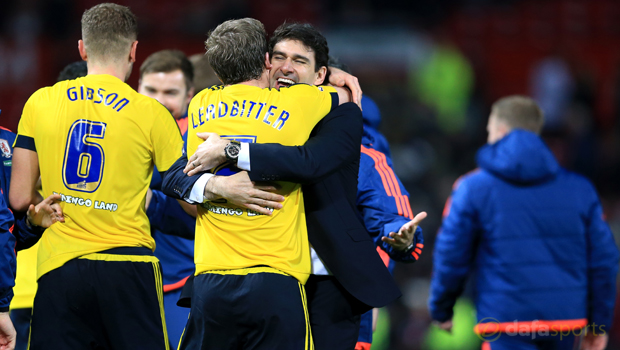 Everton will take on Middlesbrough in the quarter-finals of the Capital One Cup, with Boro boss Aitor Karanka relishing the chance to face the Toffees.

The Merseysiders progressed to the last eight of the cup competition with a penalty shoot-out victory over Norwich City on Tuesday night, with the game ending 1-1 after 120 minutes.

The Teessiders also needed spot-kicks to decide the outcome of their clash with Manchester United and came through 3-1 after the game failed to produce a goal in two hours of play on Wednesday.

The sides will now square off at the Riverside on Tuesday, December 1, with Everton priced at 7.00 to win the whole competition and Boro on offer at 19.00 to lift the trophy early next year.

The Goodison Park outfit will be confident of making it through to the semi-finals and will be looking to go all the way as they are desperate to secure their first piece of silverware since the 1995 FA Cup.

But north-east club Boro are on a bit of a roll and riding high in the Championship, with every chance of securing automatic promotion when the dust settles on their campaign in May next year.

There will certainly be no animosity in the dug-out, with Karanka suggesting that Everton boss Roberto Martinez was instrumental in helping him settle since his 2013 switch to the Riverside from the Real Madrid backroom staff.

“I am really pleased because, firstly, it is at home and our club deserve a big game at home,” he said. “The second thing is we are playing against Everton and if I have been successful since coming to England it’s because when I came here Roberto gave me some great advice.

“So I have to express my gratitude, he is a good friend and he is doing really well and I am pleased to be playing against him.”

Before that encounter, Martinez will welcome Sunderland to the north west on Sunday, with the hosts 1.50 to take care of Sam Allardyce’s men and the Black Cats on offer at 7.00 to win the Premier League game.